Because of this week's story about a geostatistician, Mohan Srivastava, who figured out how predict winning tickets in a scratch-off lottery, I've been thinking about scratch-off games. He discovered how to predict winners when he began to "wonder how they make these [games]."

Each ticket has a set of "lucky numbers." A ticket is a winner if the lucky numbers align on a tic-tac-toe grid along any row, column, or diagonal. The scratch-off portion of the game involves scratching an area on the ticket to reveal the lucky numbers. See my previous blog article for further details.

Srivastava's observation was that the "lucky numbers" on the tic-tac-toe grid have to occur less frequently than the other numbers. Otherwise, the game will pay out more money than it takes in.

Simplifying the Game for Analysis

The game costs $3 to play, and pays out the following amounts:

What If Lucky Numbers Are Assigned with Equal Probability?

What would happen if the 0s and 1s are assigned to each cell with equal probability? For example, suppose that you specify a 15% chance that any individual cell is assigned a 1. What is the expected gain/loss for that each ticket, and what percentage of tickets will be winners?

The answer is provided by the following simulation and graph. (It is possible to get an exact solution, but I'm feeling lazy.) The simulation constructs a large number of randomly assigned grids. (Each grid is represented by a row of the x matrix.) Each cell of the grid has a certain probability of being a 1. The TestWinner module determines the gain or loss for each grid by determining whether there is a row, column, or diagonal that contains all 1s. The simulation is repeated for a range of probability values, from a 10% probability to a 30% probability. 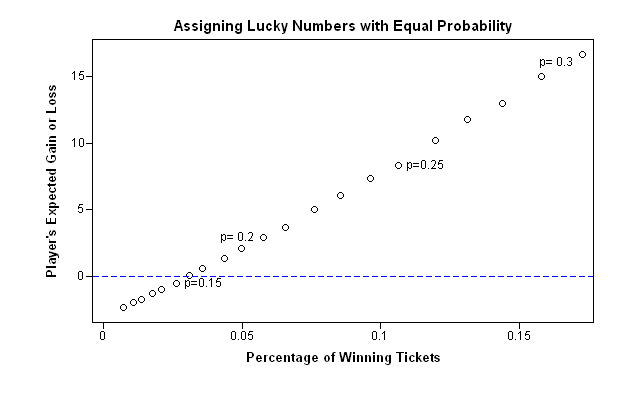 The graph shows the expected gain or loss when cells in the tic-tac-toe grid are randomly assigned according to a fixed probability value. The graph shows that the lottery corporation (that is, the government) cannot make a profit on games for which the chance of cell being a 1 is more than 15%. However, profitable games that are constructed like this have very few winners. For example, when the chance of a 1 is 15%, only 2.5% of those playing the game get a winning tic-tac-toe combination.

This is a problem for the lottery corporation, because people don't play games that they usually lose. The key to getting people to play a scratch-off game (and slot machines, and other gambling games) is to award many small prizes, but few large prizes. If the 0s and 1s are assigned to each cell with equal probability, then the large cash awards have the same chance of occurring as the smaller awards. The chance of winning has to be set very small (too small!) in order to manage the losses.

By controlling the probability that each cell contains a lucky number, the lottery corporation can control the chance of winning each prize. It can guarantee a profit for the game, while awarding many small prizes that keep customers coming back to play again.

Srivastava recognized this fact. In the Wired article he is quoted as saying:

It would be really nice if the computer could just spit out random digits. But that's not possible, since the lottery corporation needs to control the number of winning tickets.

Distribution of the Lucky Numbers 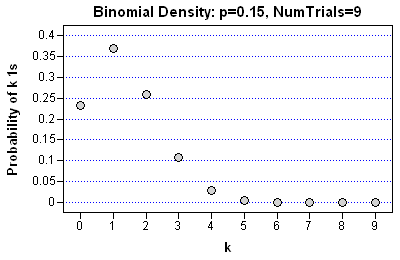 The scatter plot shows the probability that a tic-tac-toe grid will have a given number, k, of 1s for k=0, 1, 2,...,9, when there is a 15% chance that a given cell contains a 1. The graph shows that most grids (86%) that are constructed under this scheme will have zero, one, or two 1s. Obviously, none of these grids can be a winning ticket.

Once again, the conclusion is that a game that is constructed using this scheme would not be fun to play: the "lucky numbers" don't appear often enough! In order to increase the frequency of lucky numbers while managing the risk of the tickets that pay out, you need to use a construction method that assigns different probabilities to each cell of the grid.