"What is the chance that two people in a room of 20 share initials?"

This was the question posed to me by a colleague who had been taking notes at a meeting with 20 people. He recorded each person's initials next to their comments and, upon editing the notes, was shocked to discover that no two people in the meeting shared initials.

Last week I analyzed the frequency distribution of initials for 4,502 SAS employees who work with me in Cary, NC. The distribution is highly skewed. For example, there are 676 possible pairs of initials (AA, AB, AC, ..., ZX, ZY, ZZ), but 212 of those combinations (31%) are not the initials of any SAS employee in Cary. Another 89 pairs (13%) are the initials of only a single person. In contrast, the most common initials, JS, are shared by 61 people.

So how can you estimate the probability that two people in a room have the same initials? Use simulation!

It works like this. Suppose you want to estimate the probability that two SAS employees in a room of 20 have a common pair of initials. You can simulate this situation in SAS/IML software as follows:

The following SAS/IML program carries out this simulation:

According to this simulation, if a meeting at SAS is attended by 20 employees, there is a 58% chance that two people in attendance have matching initials.

It is not difficult to estimate the probability that two people will have matching initials when there are N people at the meeting: just put a loop around the previous program. (You can download the SAS/IML program that carries out the simulation.) 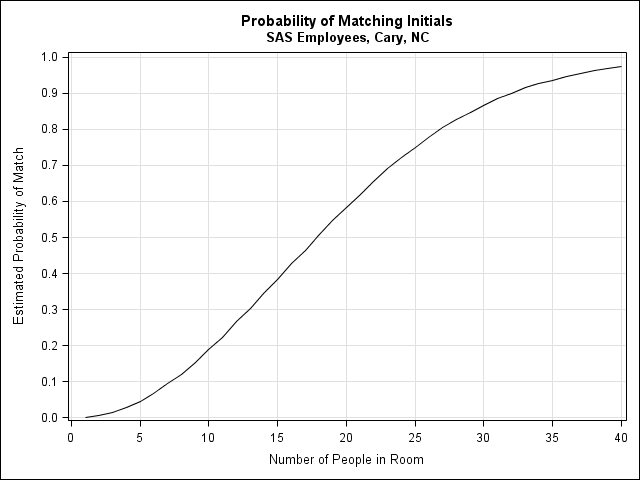 Do these estimates generalize to other situations such as 20 people in a bar? Sometimes. SAS is a diverse community and so the frequency distribution I've used here might not be representative of more homogenous populations. If you record the initials of individuals in a pub in Ireland, the distributions of initials is likely to be different. (More O'Briens and McDowell's, perhaps?)

Nevertheless, I expect these estimates to apply to many situations. So next time you're stuck in a meeting, conduct a little experiment. Does anyone in the room have the same initials?