Have you ever been stuck while trying to solve a scrambled-word puzzle? You stare and stare at the letters, but no word reveals itself? You are stumped. Stymied.

I hope you didn't get stumped on the word puzzle I posted as an anniversary present for my wife. She breezed through it.

Here's what you need:

A Dictionary of Words

In this internet age, it is easy to obtain a file that contains a dictionary of words. Some word lists are small. For example, the "Unix dictionary" contains just over 25 thousand entries. Others are quite a bit larger. I like the official Scrabble™ player's dictionary (OSPD) because it limits itself to words with eight or fewer letters.

Download your favorite wordlist and name the file "wordlist.txt." I used the following DATA step code to convert the word list to a SAS data set:

A SAS/IML Program to Unscramble Words

Suppose you have a list of 5- and 6-letter scrambled words that you want to unscramble. For this example, I will use the following set of scrambled statistical words:

You can read the dictionary and the permutations into SAS/IML matrices:

The following algorithm unscrambles the words: 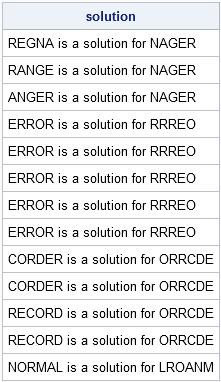 You can see that people who create scrambled-word puzzles need to be careful that there are not two or more permutations that each lead to valid words. For the letters NAGER, both RANGE and ANGER are common words that solve the puzzle. (I'd exclude REGNA.) Also notice that words with repeated letters, such as RRREO, are easier to solve in the sense that there are multiple permutations that unscramble the letters

So next time you are stuck, just fire up this SAS program to solve scrambled word puzzles.