I always emphasize efficiency in statistical programming. I have previously written about why you should never multiply with a large diagonal matrix in the SAS IML language. The reason is that it is more efficient to use elementwise multiplication than matrix multiplication. Specifically, if d is a column vector, then I advocate the following tips:

These tips extend to any matrix. If you need to multiply each column of a matrix by a constant, where the constant is different for each column, use elementwise multiplication:

Because elementwise multiplication is symmetric, it does not matter whether you write u`#B or B#u`. For convenience, the division operator (/) in IML is overloaded to perform elementwise division, which means that A/v and B/u` are also valid operations. Also, elementwise addition and subtraction are supported, such as A + v and B – u`. For details, see "Shorthand notation for row and column operations."

Four properties of the Hadamard product

In addition to being commutative and associative, the Hadamard product has four properties that are worth listing.

I will not show the mathematical proofs for these properties. Rather, I will write a SAS IML program that computes each term in the equation and shows that they are equal. In the following program, n=4, p=3, and m=2. 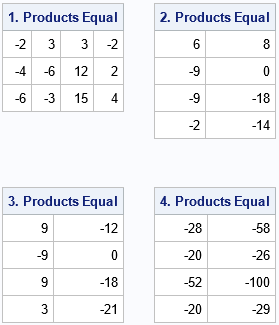 The program shows that all four properties of the Hadamard product are satisfied for the example matrices and vectors.