Every year, I write a special article for Halloween in which I show a SAS programming TRICK that is a real TREAT! This year, the trick is to concatenate two strings into a single string in a way that guarantees you can always recover the original strings. I learned this trick from @RobinHouston on Twitter.

Why would you want to combine and pull apart strings?

To give a concrete example, suppose you have two strings: "ghost" and "goblin." The first trick constructs a string such as "ghost/goblin" and shows you how to reconstruct the original values from that string if the first string does not contain the character ('/') that is used to separate the first string from the second. The second trick constructs a more complicated string: "ghost/goblinghost*goblin". You can always reconstruct the original values regardless of the characters in the strings.

The easy way: Use one delimiter

A simple technique for combining strings is to use a single delimiter to concatenate two strings and then pull them apart. That idea works provided that the delimiter is not part of the first string. Let's see how it works by concatenating the Make and Model character variables from the Sashelp.Cars data set. The following DATA step extracts a subset of the full data: 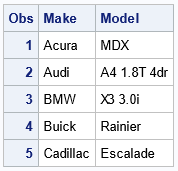 Suppose that you want to concatenate the Make and Model variables to form a new string while still being able to determine where the first string ends and the second string begins. If you know that some character such as '/' is not part of the first string, you can use the CAT or CATS function to concatenate the strings. The CATS function strips off leading and trailing blanks from all strings. Because SAS strings are blank-padded, I prefer to use the CATS function, as shown in the following DATA step: 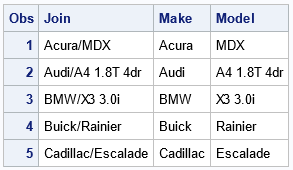 The JOIN variable contains the concatenated strings, separated by the '/' character. If you want to recover the original two values (minus any spaces that were stripped off), you can use the FIND function to locate the position of the delimiter, then use the SUBSTR function to extract the substrings before and after the delimiter, as follows:

The output shows that the v1 and v2 variables contain the original string values. The v1 and v2 variables do not contain any leading or trailing blanks, but they would if you use the CAT function instead of the CATS function. Thus, if the delimiter is not part of the first string, you can use a single delimiter to combine and split strings. The logic of the program assumes that the position of the first delimiter in the combined string is the location at which to split the string. That logic fails if the first string contains the delimiter as one of its characters.

A trick for combining and splitting any strings

In many situations, you know that the input strings will not contain a certain character, such as '/'. However, if you want a FOOLPROOF method that will work for ANY strings regardless of their contents, the trick from @RobinHouston become relevant. The trick enables you to combine and split any two strings!

The basic idea is to combine the strings by using two different delimiters instead of only one. I will use the delimiters '/' and '*', but the values do not matter. You can use 'A' and 'B' or '0' and '1', if you prefer. The method still works if the delimiter is contained in one or both strings.

Here's how to combine the strings so that they can be split later. If the original strings are v1 and v2, you form the concatenated strings
s1 = v1 + '/' + v2
and
s2 = v1 + '*' + v2
Notice that the strings s1 and s2 have the same length. In fact, they are identical except for one location: s1 contains the first delimiter whereas s2 contains the second delimiter. You then store the concatenated string
s = s1 + s2
which always has an even number of characters.

You can use the SAS DATA step to implement this combination step:

To recover the original strings from s, you can do the following:

The following DATA step splits the string back into its original values:

The output shows that the v1 and v2 variables contain the original strings.

This article shows how to concatenate two strings so that you can recover the original string values. The first trick uses only one delimiter and requires that you choose a character that is not part of the first string. The second trick is more complicated, but it works for ANY strings, regardless of their contents.

I think both tricks are real treats! You might never have need for the second trick, but it is very clever. I like to write these tricks down in case someone in the future (maybe me!) searches for "how do I combine two strings so that I can recover the original strings?" Post a comment if you use either of these tricks!