On a SAS discussion forum, a statistical programmer asked about how to understand the statistics that are displayed when you use the TEST statement in PROC REG (or other SAS regression procedures) to test for linear relationships between regression coefficients. The documentation for the TEST statement in PROC REG explains the F test in terms of a matrix of linear constraints. However, the programmer wanted a simpler explanation.

This article shows two examples that reproduce and explain the results of the TEST statement. The first example is a simple linear regression, which means there is one explanatory variable. If you test whether the slope coefficient is 0, the reduced model is the intercept-only model. The second example is more complicated and involves specifying a relationship between three regression coefficients in a multivariate regression.

For a mathematical description of the F test, see the Penn State online course notes for the general linear F test.

Simulate data from a regression model

The TEST statement enables you to infer whether the regression parameters for a population satisfy some specified relationships. A good way to understand regression is to use simulation to generate a random sample from a known regression model. For example, the following DATA step generates a sample of size 100 for which
y = 17 + 2*x1 + 0*x2 + 3*x3 + ε
where ε ~ N(0,30) is a random error term. For this sample, the correctly specified model should have parameter estimates that are close to the values β = (17, 2, 0, 3) and have a root-mean-square error (RMSE) close to 30. Furthermore, the model satisfies the linear constraints β2 = 0 and β3 + β1 = 5.

The TEST statement for a simple linear regression

Before exploring a model that has three variables, let's look at a simple one-regressor model:
y = β0 + β2*x2 + ε


Because we know the true model, we know that y does not depend on the x2 variable. We can use the TEST statement to test the null hypothesis that β2=0. Let's use PROC REG to carry out the one-variable regression and the hypothesis test. The output displays the ANOVA tables and F statistics for the model and for the hypothesis test β2=0. 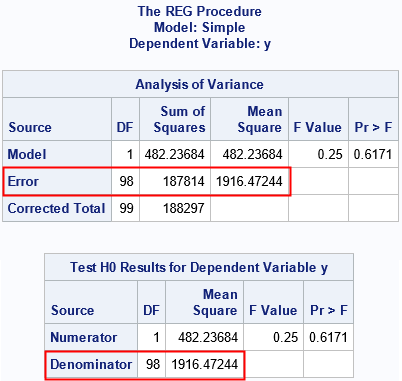 For a one-variable regression model and for the null hypothesis β2=0, the reduced model happens to be intercept-only model. Therefore, in this situation, the first row ("Numerator") of the TestANOVA table contains the same information as the first row ("Model") of the ANOVA table. However, as we will see in the next section, this result does not hold in general.

The TEST statement for a multivariate linear regression 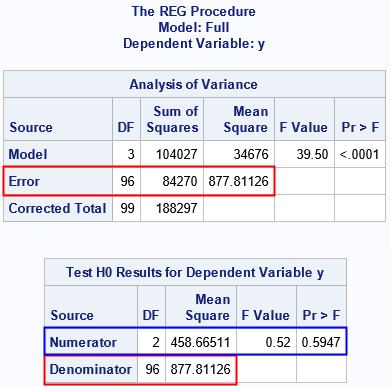 As before, the "Denominator" row of the TestANOVA table is the same as the "Error" row of the ANOVA table for the full model. However, the "Numerator" row for this null hypothesis does not appear in any other output table. The "Numerator" row corresponds to the RSS for the reduced model, which is the model that you get when you restrict the regression coefficients to the values on the TEST statement. But how can we get that information from PROC REG?


Notice that the original model had p=4 parameters and k=2 constraints. The reduced model has p-k=2 parameters. Let's define new variables in SAS and solve the reduced regression model by using PROC REG: 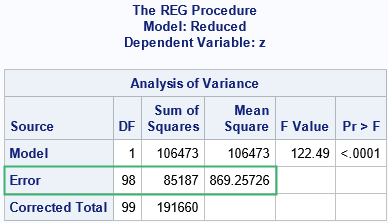 The Penn State online course notes show how to construct an F test by using the "Error" rows of the ANOVA tables for the full and reduced model. Define RSSF to be the residual sum of squares for the full model, and let DFF be the error degrees of freedom for the full model. Similarly, define RSSR to be the RSS for the reduced model and let DFR be the error degrees of freedom. Then you can define MNum = (RSSR - RSSF) / (DFR - DFF) and MDenom = RSSF / DFF. The F statistic is the ratio F = MNum / MDenom.

PROC REG stored the ANOVA tables for both models in data sets. You can read the data into a DATA step or into PROC IML and construct the F test manually: