Recently, I saw a new kind of palindrome: The rotational palindrome. You take a word (written in lowercase) and rotate it 180 degrees so that the letters are upside down and reversed. You then ask whether the pattern of letters matches the original word. If so, you have found a rotational palindrome!

This article shows how to detect palindromes, palindrome phrases, and rotational palindromes in SAS. Along the way, we learn about a few useful string-comparison functions, such as the UPCASE, STRIP, COMPRESS, REVERSE, and TRANSLATE functions.

Detect a palindrome word in SAS

To introduce the topic of palindromes, let's first consider only words. If you want to determine whether a word is a palindrome, do the following:

The following SAS DATA step implements this algorithm on a series of words. 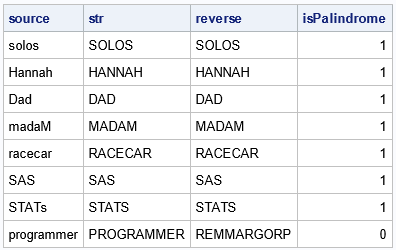 The data set contains an indicator variable (isPalindrome), which has the value 1 for palindrome words and the value 0 if the word is not a palindrome. Words like 'solos', 'dad', and 'SAS' are palindromes. The word 'programmer' is not.

Detect a palindrome phrase in SAS

The same logic works for a palindromic phrase but requires an extra step. For a phrase, you must first remove blanks and punctuation from the string, then apply the preceding logic to the remaining sequence of letters. You can use the COMPRESS function in SAS to remove blanks and punctuation. Often, programmers call the COMPRESS function with two arguments: the input string and a set of characters to remove from the string. However, the optional third argument provides a way to remove common sets of characters from the input string. For example, to remove all punctuation characters, you can specify 'p' as part of the third argument. To remove all whitespace, you can specify the 's' modifier. You can specify 'ps' to combine those two modifiers, as done below: 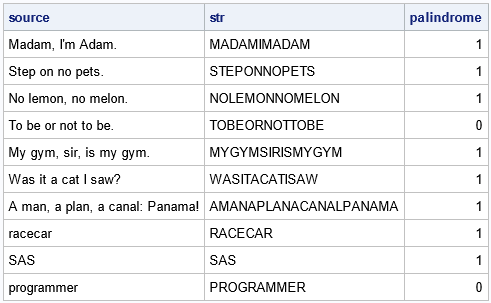 This program handles words as well as phrases, so it can replace the program in the previous section. As a boy, I encountered the palindromic phrase "A man, a plan, a canal: Panama!" in a book of word games; it has always amused me!

To completely define the transformation, you should also define how it acts on the remaining letters ('a', 'c', 'e', etc.). Words that contain these letters are never rotational palindromes because rotating these letters by 180 degrees does not result in a valid lowercase letter.

You can use a mathematical trick to check for a rotational palindrome. A rotation by 180 degrees is mathematically equivalent to a horizontal reflection followed by a vertical reflection. Therefore, you can program a 180-degree rotation by first substituting the rotationally similar letter and then reversing the string, as follows: 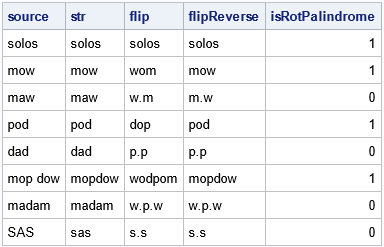 A traditional palindrome is a string of letters that are the same in forward and reversed order. This article shows how to use built-in string functions in SAS to detect palindromes. Some useful functions include UPCASE, STRIP, COMPRESS, and REVERSE. In addition, you can generalize the notion of a palindrome. A generalized palindrome is a fixed point for a transformation of the letters in a string. I show how to define a rotational palindrome by mapping certain letters to their rotationally similar images, then checking whether the reversal of the resulting string is equal to the original string.