Interestingly, this process always converges. The number that it converges to is called the arithmetic-geometric mean of x and y, which is denoted by AGM(x,y). The AGM is between the geometric mean and the arithmetic mean. I am not aware of a multivariate generalization of the AGM function.

In SAS you can use the SAS/IML language or PROC FCMP to create a user-defined function that computes the arithmetic-geometric mean. Since the AGM is not a vector operation, I show the PROC FCMP approach:

The following program computes the graph of the AGM function and displays a contour plot of the result. Note that AGM(x, x) = x for any nonnegative value of x. 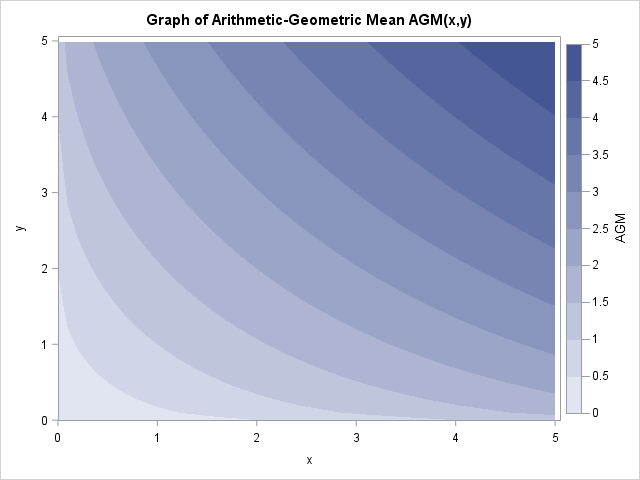 So, what is the arithmetic-geometric mean good for? The AGM seems mainly useful in applied mathematics and number theory for computing elliptic functions and elliptic integrals. I am not aware of any applications to statistics, perhaps because the AGM is not defined for a sample that contains n elements when n > 2.

Although the AGM function is not used in statistics, the iterative algorithm that defines the AGM is a technique that I have seen often in computational statistics. When a researcher wants two conditions to hold simultaneously, one possible method is to alternately solve for each condition and prove that this iterative process converges to a solution that satisfies both conditions simultaneously. The iterative process can be an effective way to implement an optimization problem if each sub-optimization is simple.