The NLPFEA subroutine in SAS/IML software

The NLPFEA routine returns a point in the feasible region from an arbitrary starting guess. Suppose the problem has p (possibly bounded) parameters, and the feasible region is formed by k > 0 additional linear constraints. Then you can represent the feasible regions by a (k+2) x (p+2) matrix, which is the representation that is used for linear programming and constrained nonlinear optimizations. The first row specifies the lower bounds for the parameters and the second row specifies the upper bounds. (Missing values in the first p columns indicate that a parameter is not bounded.) The remaining k rows indicate linear constraints. For example, the following matrix defines a pentagonal region for two parameters. You can call the NLPFEA subroutine to generate a point that satisfies all constraints:

It is interesting to visualize the NLPFEA subroutine. The following SAS/IML statements create 36 initial guesses that are distributed uniformly on a circle around the feasible region. For each guess, the program transforms the guess into the feasible region by calling the NLPFEA subroutine. The initial and transformed points are saved to a SAS data set and visualized by using PROC SGPLOT: 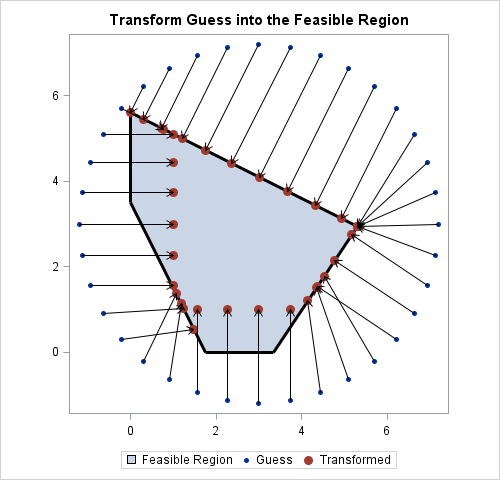 Before I finish, I want to point out that the nonlinear programming (NLP) subroutines in SAS/IML software rarely require you to call the NLPFEA subroutine explicitly. When you call an NLP routine for a linearly constrained optimization and provide a nonfeasible initial guess, the NLP routine internally calls the NLPFEA routine. Consequently, you might see the following NOTE displayed in the SAS log: NOTE: Initial point was changed to be feasible for boundary and linear constraints. For example, run the following program, which provides a nonfeasible initial guess to the NLPNRA (Newton-Raphson) subroutine.

In this program, the NLPNRA subroutine detects that the guess not feasible. It internally calls NLPFEA to obtain a feasible guess and then computes an optimal solution. This is very convenient for programmers. The only drawback is that you don't know the initial guess that produced the optimal solution. However, you can call the NLPFEA subroutine directly if you want to obtain that information.

You can download the SAS program that creates the tables and graphs in this article.