This article uses graphical techniques to visualize one of my favorite geometric objects: the surface of a three-dimensional torus. Along the way, this article demonstrates techniques that are useful for visualizing more mundane 3-D point clouds that arise in statistical data analysis.

Define points on a torus

A torus is the product of two circles, so it can be parameterized by two angles, usually called θ and φ. You can create a regular grid of points in the square (θ, φ) ∈ [0, 2π] x [0, 2π] and map the points into Euclidean three-space as shown in the following SAS DATA step: 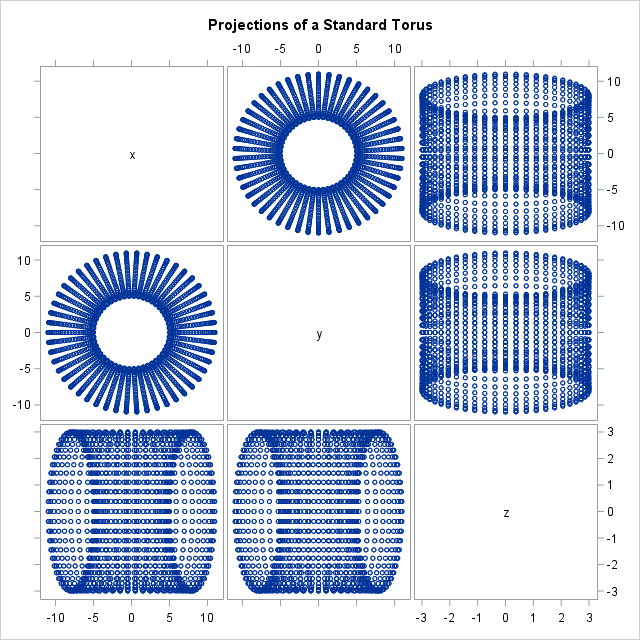 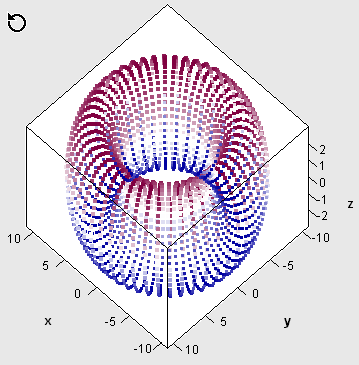 Alternatively, if you want to look at planar projections with PROC SGSCATTER, you can rotate the torus so that the projections onto the coordinate planes are not degenerate.

Rotating a cloud of points

My previous article defined SAS/IML functions that create rotation matrices. The following SAS/IML program is almost identical to the program in the previous article, so I will not explain each statement. The program reads the Torus data set, rotates the points in a particular way, and writes the rotated coordinates to a SAS data set.

You can use PROC SGSCATTER to project these rotated points onto the coordinate planes. The TRANSPARENCY= option creates semi-transparent markers that give the illusion of a ghostly see-through torus. This can be an effective technique for visualizing any point cloud, since it enables you to see regions in which overplotting occurs. The statements also use the COLORRESPONSE= option to color the markers by the (original) Z variable. The COLORRESPONSE= option requires SAS 9.4m3. 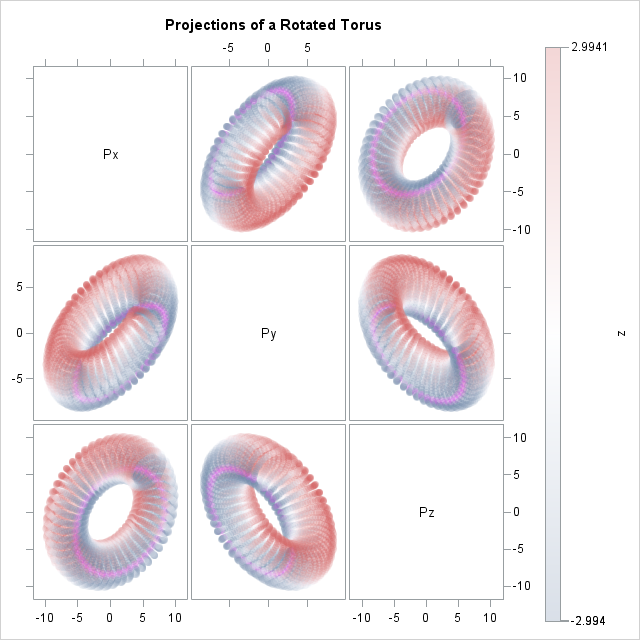 The transparent markers serve a second function. The torus is composed of a sequence of circles. Therefore, the last circles (near θ = 2π) will obscure the first circles (near θ = 0) if opaque markers are used. The parametric construction is very apparent if you remove the TRANSPARENCY= option.

If you want to plot without transparency, you should sort the data, which is a standard technique in the graphics community where it is called z-ordering or depth sorting. For example, in the (Px,Py) plane you can sort by the Pz variable so that negative Pz values are plotted first and positive Pz values are plotted on top of the earlier markers. Unfortunately, you can only use this sorting trick to plot one pair of coordinates at a time. The following code demonstrates this trick for the (Px, Py) plane: 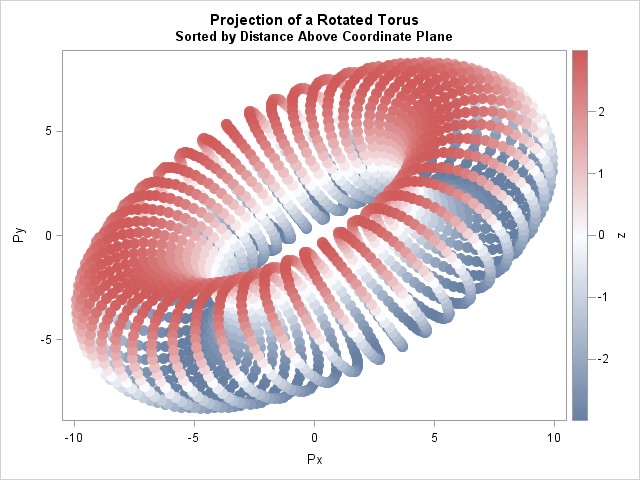 Your high-dimensional point clouds might not look as cool as this torus, but if you use these visualization tips, the data will be easier to interpret and understand. The SGSCATTER procedure in SAS is an easy-to-use routine for investigating relationships among several variables.