The distribution of nearest neighbor distances

The distribution of the nearest-neighbor distances provides information about the process that generated the spatial data. Let's look at two example: clustered data for trees in a forest and uniformly distributed (simulated) data. 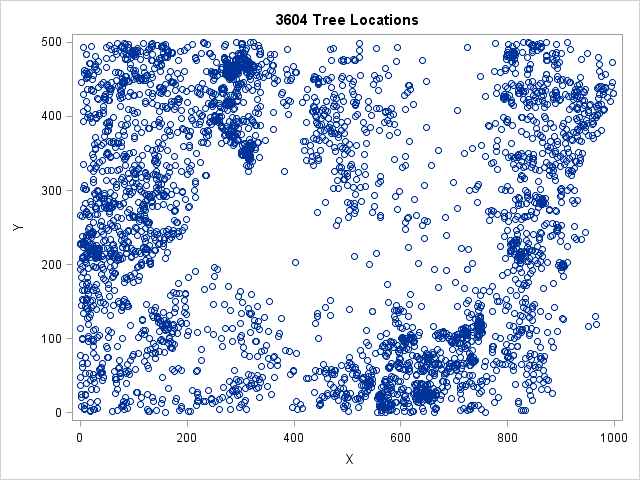 The Sashelp.Bei data contains the locations for 3,604 trees in a forest. A scatter plot of the data is shown to the left. The trees appear to be clustered in certain regions, whereas other regions contain no trees. This indicates that the trees are not uniformly distributed throughout the region.

Let's use the NearestNbr module from my previous blog post to compute the nearest neighbor distances for these tree locations. The following program saves the distances to a SAS data set named Dist_Trees. For comparison, the program also generates 3,604 random (uniformly distributed) points in the same rectangular region. The nearest neighbor distances for these simulated points are written to a data set named Dist_Unif.

You can use a PROC UNIVARIATE to compare the two distributions of distances. The following DATA step merges the distances and adds an indicator variable that has the value "Uniform" or "Trees." PROC UNIVARIATE creates a graph of the empirical cumulative distribution function for each set of nearest-neighbor distances: 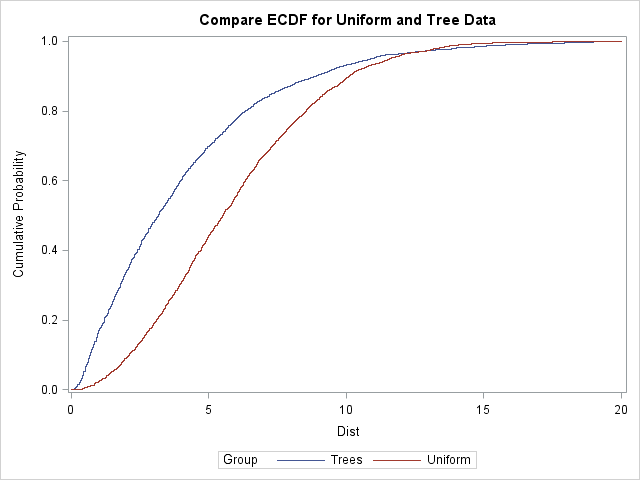 In SAS/STAT 13.2 and beyond you can use the new SPP procedure to perform comparisons like this automatically. The SPP procedure supports several statistical tests for "complete spatial randomness," which enable you to compare the observed distribution to the expected distribution for uniformly distributed data.

The SPP procedure supports tests that are based on nearest-neighbor distances, as well as other tests. The example in this article is essentially a visual representation of the "G function test," which you can carry out by using the following statements: 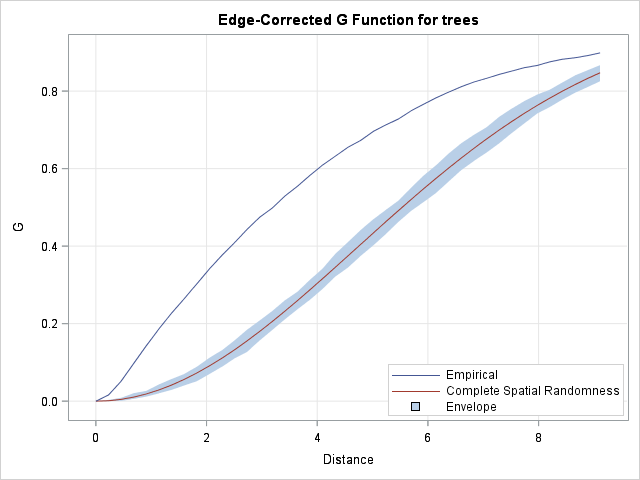 The SPP procedure creates a graph of the "edge-corrected G function." The upper curve is the empirical distribution of nearest neighbor distances for the trees, adjusted for edge effects caused by a finite domain. The lower curve shows the expected distribution for random uniform data of the same size on the same domain. The light-blue band is a 95% confidence envelope, which gives you a feeling for the variation due to random sampling. The envelope is formed by 100 simulations of random uniform data, similar to the simulation in the previous section.

The graph indicates that there is structure in the trees data beyond what you would expect from complete spatial randomness. You can use other features of PROC SPP to model the trees data. For an overview of the spatial analyses that you can perform with PROC SPP, see Mohan and Tobias (2015), "Analyzing Spatial Point Patterns Using the New SPP Procedure".

In summary, nearest-neighbor distances are useful for analyzing properties of spatial point patterns. This article compared tree data to a single instance of random uniform data. By using the SPP procedure, you can run a more complete analysis and obtain graphs and related statistics with minimal effort.