Edmond Halley (1656-1742) is best known for computing the orbit and predicting the return of the short-period comet that bears his name. However, like many scientists of his era, he was involved in a variety of mathematical and scientific activities. One of his mathematical contributions is a numerical method for finding the roots of a real-valued function. The technique, which is called Halley's method, is similar to Newton's method, but converges more rapidly in the neighborhood of a root.

There are dozens of root-finding methods, but Newton's method is the gold standard for finding roots of general nonlinear functions. It converges quadratically and is easy to implement because the formula requires only the evaluation of a function and its first derivative. Other competing methods do not use derivatives at all, or they use higher-order derivatives.

An example of finding a root in SAS/IML

Consider the function f(x) = x exp(x). If you want to find the values of x for which f(x)=c, you can recast the problem as a root-finding problem and find the roots of the function f(x)-c. For this particular function, the equation f(x)-c has one root if c ≥ 0 and two roots if -1/e < c < 0. 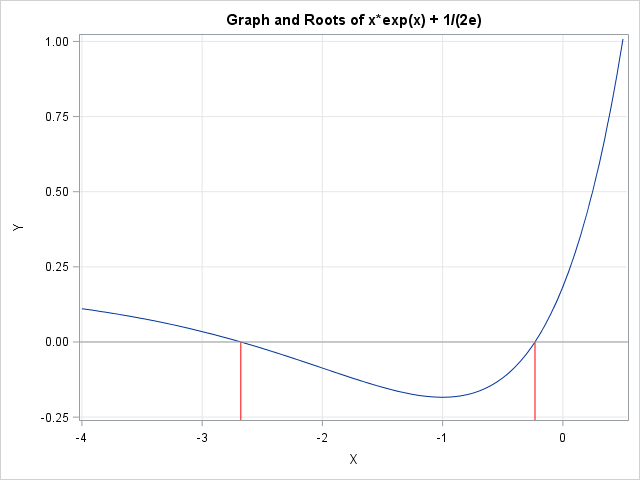 To be concrete, let c = -1/(2e) so that the equation has two roots. The function f(x)-c is shown to the right and the two roots are marked by red line segments. You can use the built-in FROOT function in SAS/IML to locate the roots. The FROOT function does not use Newton's method. Instead, it requires that you specify an interval on which to search for a root. From the graph, you can specify two intervals that bound roots, as follows:

For many functions, the computational cost of evaluating the extra term in Halley's formula does not offset the gain in convergence speed. In other words, it is often quicker and easier to use Newton's simpler formula than Halley's more complicated formula. However, Halley's method is worth implementing when the ratio f″(x) / f′(x) can be evaluated cheaply. The current function provides an example: f′(x) = (x+1) exp(x) and f″(x) = (x+2) exp(x), so the ratio is simply (x+2) / (x+1). This leads to the following SAS/IML functions. One function implements Newton's iteration and the other implements Halley's iteration:

Again, for Halley's method to be useful in practice, the ratio f″(x) / f′(x) must be easy to evaluate. To generalize this example, the ratio simplifies if the function is the product of a simple function and an exponential: f(x) = P(x)*exp(x). For example, if P(x) is a polynomial, then f″ / f′ is a rational function.