Last week I showed some features of SAS formats, including the fact that you can use formats to bin a continuous variable without creating a new variable in the DATA step. During the discussion I mentioned that it can be confusing to look at the output of a formatted variable if you don't realize that a format has been applied.

Two formats that sometimes puzzle new SAS programmers are the PVALUEw.d format, which displays p-values, and the ODDSRw.d, which displays odds ratios. These formats appear in many SAS statistical tables. They are the reasons that a table might display a very small p-value or odds ratio with the string "< 0.001." This article describes these formats and explains how to interpret extreme odds ratios.

The following call to PROC LOGISTIC displays two tables. One has a column for p-values, the other displays odds ratios: 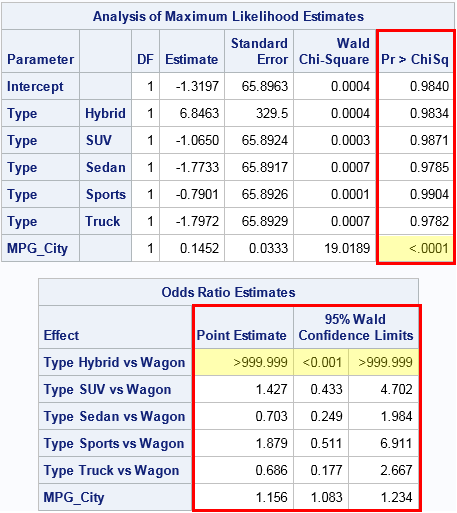 The cells that are highlighted in yellow show the effect of the formats. In the ParameterEstimates table, the p-value for the MPG_City variable is very small, so it is displayed by using the formatted values "<.0001". In the OddsRatios table, the estimate of the odds ratio for the "Hybrid" vehicles versus the "Wagon" vehicles (the reference level) is very large. It is displayed as ">999.999". Furthermore, the 95% confidence interval for the parameter is displayed as [<0.001, >999.999], which you can interpret as "any value in the interval (0, ∞)."

If you know about these formats, you can interpret the meaning of the highlighted cells. You can always discover the formats used in an ODS table by using the ODS OUTPUT statement to write the tables to a SAS data set and then use PROC CONTENTS to display the variables and formats in the table, as follows:

The PVALUE and ODDSR formats

The PVALUEw.d and ODDSRw.d formats are very simple. Small values are displayed by using a "less than" symbol. Here "small" means less than 10-d, where d is the number of decimals in the format specification. Usually d=3 or d=4. The ODDSRw.d format has a similar behavior for large numbers. The formatted values are displayed by using the "greater than" symbol. For the statistical programmer, the question is not "why is SAS displaying funny-looking numbers," but "what do these numbers tell me about my model and my data?"

For a p-value, small numbers indicate statistical significance. This is usually good. It means that an effect is significant or that there is evidence to reject some null hypothesis.

For an odds ratio, medium-sized numbers appear most often. For example, an odds ratio of 10 (or, equivalently, 1/10) might enable you to conclude that "patients in the experimental group are 10 times more likely to survive than patients in the placebo group." Seeing very large numbers (like 104) or very tiny number (10-4) often indicates that something is wrong. Perhaps your model is misspecified, or perhaps the data is degenerate in some way and does not provide any evidence for or against a statistical hypothesis.

As an example, let's try to understand why the odds ratio is so extreme for the example in this article. The model is trying to predict whether a vehicle is manufactured in Asia or the US. An explanatory factor is the Type variable, and the OddsRatio table indicates something strange about the "Hybrid" level. When using a categorical variable to predict a categorical response, it is often useful to look at the cross-tabulation of the data for the response and explanatory variables:

The output from PROC FREQ shows that the "Hybrid" level of the Type variable has only three observations. Furthermore, all three observations are for Asian-manufactured vehicles. The model tries to predict the probability that a car is Asian, given the Type of the car. However, the data indicate that a hybrid car is "infinitely more likely" to be Asian because all hybrid vehicles in the data set are Asian.