My previous blog post shows how to use PROC LOGISTIC and spline effects to predict the probability that an NBA player scores from various locations on a court. The LOGISTIC procedure fits parametric models, which means that the procedure estimates parameters for every explanatory effect in the model. Spline bases enable you to fit complex models, but it is easy to generate many spline effects, which means that you need to be careful not to overfit the data.

In contrast, modern nonparametric models enable you to balance the complexity of a model with the goodness of fit, thus reducing the likelihood of overfitting the data. SAS provides several procedures that fit nonparametric regression models for a binary response variable. Options include:

Generalized additive models use spline effects to model nonlinear relationships in data. A smoothing penalty is applied to each spline term in an attempt to model nonlinear features without overfitting the data. For details and examples, you can read the GAMPL documentation or watch a video about PROC GAMPL.

The syntax for the GAMPL procedure is similar to the familiar syntax for PROC LOGISTIC or PROC GENMOD. You can specify spline effects and the distribution of the response variable. The following statement uses a two-dimensional thin-plate spline to model the probability of Stephen Curry scoring from various shooting locations. The data are from Robert Allison's blog "How to graph NBA data with SAS." You can download the complete SAS program that produces the graphs in this post.

The OUTPUT statement saves the predicted probabilities to a data set. The option MAXDF=40 tells the procedure to consider up to 40 degrees of freedom for the spline effect and to choose the smoothing parameter that provides the best tradeoff between model complexity and goodness of fit. For the Stephen Curry data, the optimal smoothing parameter results in 14.7 degrees of freedom. 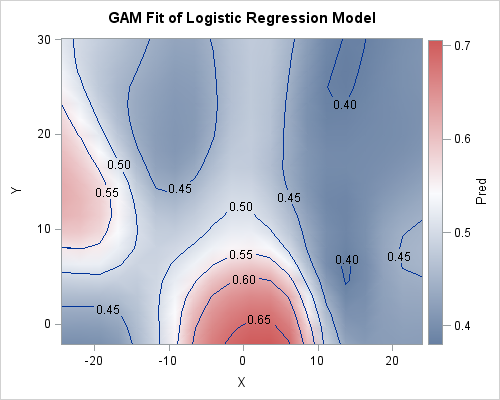 I initially view the results of any nonparametric analyses with skepticism. I trust the mathematics behind the methods, but I need to be convinced that a qualitative feature in the predicted values is real and not merely an artifact of some complicated nonparametric witchcraft.

There are many statistical techniques that enable you to evaluate whether a model fits data well, but it is wise to perform a basic "sanity check" by using a different nonparametric procedure to analyze the same data. If the two analyses reveal the same qualitative features in the data, that is evidence that the features are truly present. Conversely, if two models produce different qualitative features, then I question whether either model is accurate. I call this sanity check the fundamental principle of nonparametric analysis: Trust, but verify.

Let's apply the fundamental principle to the NBA data by running PROC ADAPTIVEREG: 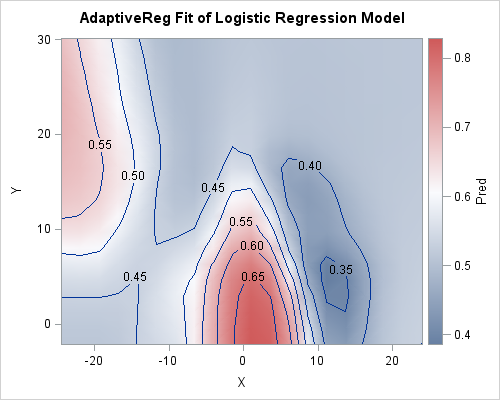 The PROC ADAPTIVEREG analysis is shown to the left. The contour plot shows the same qualitative features that were apparent from the LOGISTIC and GAMPL analyses. Namely, the probability of scoring is high under the basket, low to the right, average up the middle, and high on the left. Seeing these features appear in several analyses gives me confidence that these features of the data are real. After verifying that the models are qualitatively similar, you can investigate which model is better, perhaps by splitting the data into subsets for model training, validation, and testing.

This article briefly introduced two nonparametric procedures in SAS that can analyze binary response variables and other response distributions. The two analyses produced qualitatively similar predictions on sample data. The fundamental principle of nonparametric analysis is a meta-theorem that says that you should verify the qualitative predictions of a nonparametric model. Reproducibility is a necessary (but not sufficient) condition to believe that a feature is real and not spurious. For this example, all analyses agree that Stephen Curry shoots better from one side of the court than from the other.