The FREQ procedure in SAS supports computing exact p-values for many statistical tests. For small and mid-sized problems, the procedure runs very quickly. However, even though PROC FREQ uses efficient methods to avoid unnecessary computations, the computational time required by exact tests might be prohibitively expensive for certain tables. If so, you can use a Monte Carlo approach to randomly generate tables that satisfy the null hypothesis for the test and evaluate the test statistic on those tables.

This article shows how to generate Monte Carlo estimates for exact tests in SAS. For many tests, you can use the EXACT statement in PROC FREQ, which supports the MC option for computing Monte Carlo estimates. You can also use SAS/IML to simulate many random contingency tables, compute the statistic on each table, and thereby approximate the sampling distribution of the test statistic.

An example of an exact chi-square test in SAS 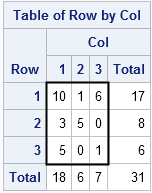 Let's see how an exact test works for a familiar test like the (Pearson) chi-square test for independence of rows and columns.

The adjacent 3 x 3 table (the nine number inside the heavy rectangle) appears in Agresti, Wackerly, and Boyett (1979). If you run a chi-square test in PROC FREQ, the value of the chi-square statistic as 14.81 and the p-value of 0.0051. However, most of the cells in this table have small counts. Consequently, the procedure will also issue a warning: "WARNING: 89% of the cells have expected counts less than 5. (Asymptotic) Chi-Square may not be a valid test." This is a classic example that calls for an exact test, which you can compute by using the EXACT statement, as follows:

The output tells you that the exact p-value is 0.0038. Therefore you would reject (at the 0.05 significance level) the null hypothesis that the rows and columns are independent.

The exact test finishes almost instantly because the table is small, both in terms of sample size (N=31) and in terms of dimensions (3 x 3). Monte Carlo sampling (simulation) enables you to handle bigger samples and dimensions. It is easy to get Monte Carlo estimates from PROC FREQ: you merely add the MC option in the EXACT statement, as follows: 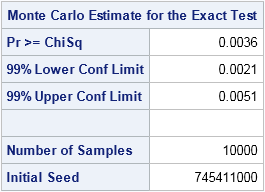 Because I did not provide a random number seed, the Monte Carlo simulation is seeded by the time of day, which means that you will get a different answer each time you run the program. By default, the EXACT statement generates 10,000 random tables that have the same row and column sum as the observed table. It evaluates the chi-square statistic on each table and counts how many statistics have a value equal to or more extreme than the observed values. For this simulation, 36 of the 10,000 random tables satisfied the condition. The proportion of extreme statistics (0.0036) is the Monte Carlo estimate for the p-value of the test. For more precise estimates, you can use the N= suboption to increase the number of samples for the Monte Carlo simulation.

Run the Monte Carlo simulation yourself

As I wrote last week, you can use the SAS/IML language to implement an algorithm that simulates contingency tables from the null distribution, which assumes no association between the row variable and the column variable. Let's see how you can use that algorithm to implement your own Monte Carlo estimate for the chi-square statistic.

You can download the Monte Carlo program, which has the following parts:

The first step is to define the observed table and compute the test statistic on that table:

The printed value is 14.81, which agrees with the output from PROC FREQ.

The following module implements the second step. The module simulates tables from the null distribution and computes the chi-square statistic on each. A column vector of statistics is returned.

After you have computed the statistics, the rest is easy. The following function computes the usual estimate and confidence interval for a binomial proportion:

For this simulation, 40 of the 10,000 random tables had a value of the test statistic that was at least as extreme as the observed table. The estimate (0.004) and the 99% confidence limits are consistent with the Monte Carlo estimates from PROC FREQ.

Lastly, you might want to use your Monte Carlo computations to visualize the approximate sampling distribution for the statistic. You can create a histogram of the 10,000 statistics and mark the location of the observed test statistic by using a reference line: 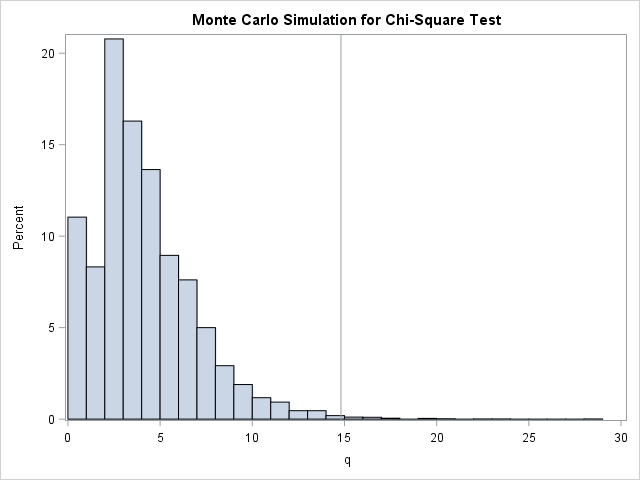 The last two steps demonstrate techniques that are useful in other situations. For example, you can use them to visualize a bootstrap distribution and to estimate p-values for permutation tests and other resampling methods.