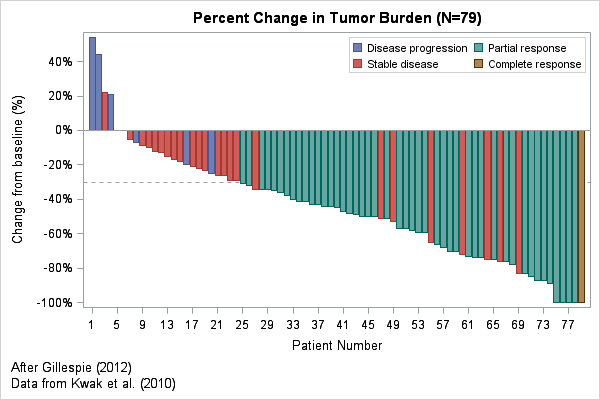 In clinical trials, a waterfall plot is often used to indicate how patients in the study responded to treatment. In oncology trials, the response variable might be the percent change in the size of a tumor from the individual's baseline value at the start of the trial. The percent change is plotted for each patient, who are usually ordered from worst (the tumor grew) to best (the tumor vanished). Tumors that grow have a positive change; a reduction in size corresponds to a negative value between 0% and -100%. Clinical trials in other areas would have a different response variable, but the ideas are the same.

Clinical researchers use a bar chart to show the distribution of the response variable because the color of the bar can encode additional characteristics for each patient, such as the patient's Response Evaluation Criteria in Solid Tumors (RECIST) scores. The RECIST score classifies a tumor's response to treatment into categories such as "Progressive Disease," "Stable Disease," "Partial Response," and "Complete Response." In the waterfall plot at the top of this article, these values are used to color each bar.

This article creates a waterfall plot that is based on Figure 2 in "Understanding Waterfall Plots" (Gillespie 2012). The data are based on Kwak et al (2010). I did not have access to the original data, so I estimated values from the published graph.

Creating a waterfall plot as a bar plot

The waterfall plot is essentially a bar chart where each bar represents a patient and the bars are colored by a discrete variable. Waterfall plots are limited to studies that have a few hundred patients because the width of each bar requires several pixels.

The following DATA step defines the data. The response variable (REPONSE) is the tumor's percent change from baseline measurements. A decimal value represents the percentages (for example, -0.75 represents -75% change, and the PERCENTN7. format is used to format the response. Discrete categories in SAS are (by default) arranged in alphabetical order, so I use the values 1, 2, 3, and 4 to encode the RECIST values and I create a user-defined format to display those values as text. You can download the complete program that creates the data and waterfall plot.

The first step is to sort the data by the response variable. For a response variable that measures a change in tumor size, sort the data in descending order so that first patient represents the worst outcome and the last patient represents the most desirable outcome. Each observation in the sorted data is then assigned an index that indicates the position in the sorted list. This index variable will be used to plot the response along a horizontal axis:

The data are now ready to plot. It is ironic that the WATERFALL statement the SGPLOT procedure is not used to create a waterfall plot! Instead, use the VBAR statement to create the waterfall plot. The GROUP= option enables you to color the bars according to the RECIST values.

The plot appears at the top of this article. Each statement is explained below:

If you want to specify particular colors for the bars, use the STYLEATTRS statement as shown in Sanjay Matange's blog post about Clinical Graphs.

The previous example shows how to create a waterfall plot in SAS for a small to moderate number of patients. However, even for this small sample (79 patients), the labels for the patients overlap and so you need to use the FITPOLICY= option to make the tick labels look nicer. Even after thinning the labels, this example looks a little strange because the tick labels are the "non-round" numbers 1, 5, 9, 13, 17,....

An alternative way to create the waterfall plot is to replace the VBAR statement (which assumes a categorical X variable) with a NEEDLE statement (which assumes a continuous X variable). You can set the widths of the needles to be thick, thereby simulating the appearance of a bar chart. However, the continuous X axis enables you to specify the VALUES= option in the XAXIS statement, thereby producing "round numbers" for the tick values, as shown below: 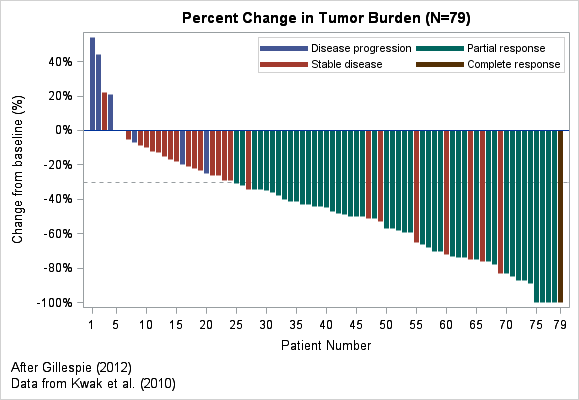 The new waterfall plot (click to enlarge) has axis labels that indicate the first and last patients; intermediate patient numbers differ by 5. You might need to play with the relative widths of the plot and of the needles in order to eliminate irregular gaps between adjacent needles.

In summary, you can create a basic waterfall plot in SAS software by using the VBAR or NEEDLE statements in the SGPLOT procedure. More complicated waterfall plots are discussed in the following papers by Pandya (2012) and Sarkar (2014).