Last week I was chatting with some mathematicians and I mentioned the blog post that I wrote last year on the distribution of Pythagorean triples.

From a statistical point of view, it is interesting to estimate the distribution of the smallest angle in primitive Pythagorean right triangles. Suppose that you consider only the primitive triangles whose hypotenuse is less than 106. The following histogram shows the distribution of the smallest angle (arctan(b/a) if a is the longer leg) for angles ranging from 0 to 45 degrees in increments of 0.5 degrees. The histogram is formed from 98,151 triangles, which is considerably less than the 159,139 primitive right triangles whose hypotenuses are less than one million. 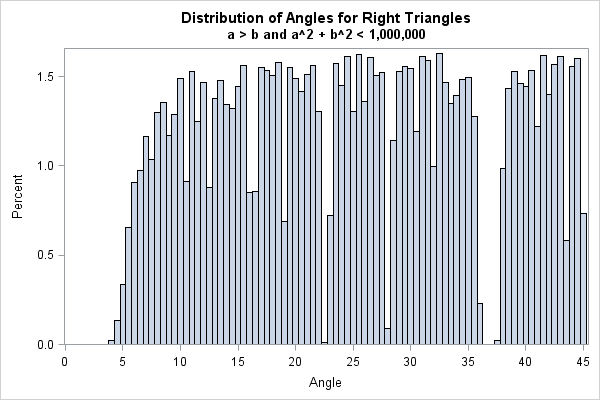 The histogram has several interesting features:

The gaps are very interesting. I conjecture that the gaps in the distribution are not random, but that they are related to low-order triangles. The following statements compute the smallest angle of some right triangles whose legs are small integers: 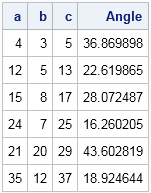 If you overlay lines at each of the angles above, they fall right into the gaps of the histogram. The (3,4,5) triangle is centered at the biggest gap (37 degrees). The (5, 12, 13) triangle is responsible for the next largest gap (23 degrees), and so forth. You can overlay these lines on the histogram, or overlay the lines on a fringe plot, as shown in the following image in which the red lines represent the angles of six low-order triangles:

If this histogram is representative of the true density distribution of the smallest angle in a Pythagorean triangle, the low-order triangles seem to be surrounded by a region of reduced density. If I were to study this problem further, I would conjecture that the gap induced by a low-order triangle is related to Farey sequences. Farey sequences arise in the darndest places, ranging from the dynamics of planetary objects to the study of Diophantine equations. In fact, the fringe plot reminds me of the gaps and divisions in Saturn's rings, which is another place where Farey sequences have an application. Of course, these gaps could also be an artifact of the algorithm that I am using to generate the primitive Pythagorean triangles, but that can be checked by using a different algorithm to generate the Pythagorean triples. Personally, I think the gaps are produced by a real number-theoretic phenomenon.

The density distribution of the smallest angle is interesting, don't you think? Mathematicians who work in number theory can probably explain why the gaps exist, but they were a surprise to me. Who would have guessed that Pythagorean triangles would lead to such an interesting distribution? It's a beautiful connection between probability, statistics, and high-school geometry.

Addendum 16APR2015: Well, my conjecture was wrong. Ian Wakeling implemented a different algorithm for generating all primitive Pythagorean triples that have a hypotenuse length that is less than 1,000,000. I have linked to his SAS/IML program. His program indicates that the angles of the Pythagorean triangles are uniformly distributed in the interval (0, 45) degrees, which is itself an interesting result! The artifacts that I saw are a result of the algorithm that I was using to construct the triples, not a property of the triples themselves. Thanks, Ian!