Have you ever noticed that some SAS/IML programmers use the CALL statement to call a subroutine, whereas others use the RUN statement? Have you ever wondered why the SAS/IML language has two statements that do the same thing?

It turns out that the CALL statement and the RUN statement do not do the same thing! Read on to discover how they differ.

So that's the difference between the RUN and CALL statements: The RUN statement looks first for a user-defined module with the specified name. If it finds it, then it calls that module. Otherwise, it calls the built-in subroutine that has the specified name. The CALL statement looks for a built-in subroutine and immediately calls that routine if it is found.

An example: Overriding the EIGEN subroutine

As I said, I don't recommend that you routinely write user-defined modules that have the same name as a SAS/IML built-in, but let's examine a situation in which it might be convenient to do so. Let's assume that you often read data sets that represent symmetric matrices, and that these data sets are stored in lower triangular form with missing value in the upper triangular portion of the matrix. For example, this is the default storage method for distance matrices that are created by using the DISTANCE procedure in SAS/STAT software, as shown below: 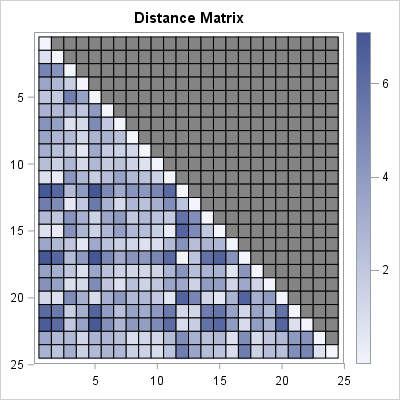 In summary, the CALL and RUN statements enable you to choose between a built-in subroutine and a custom subroutine that have the same name.

Have you ever had the need to override a built-in SAS/IML subroutine? Let me know the details by leaving a comment.