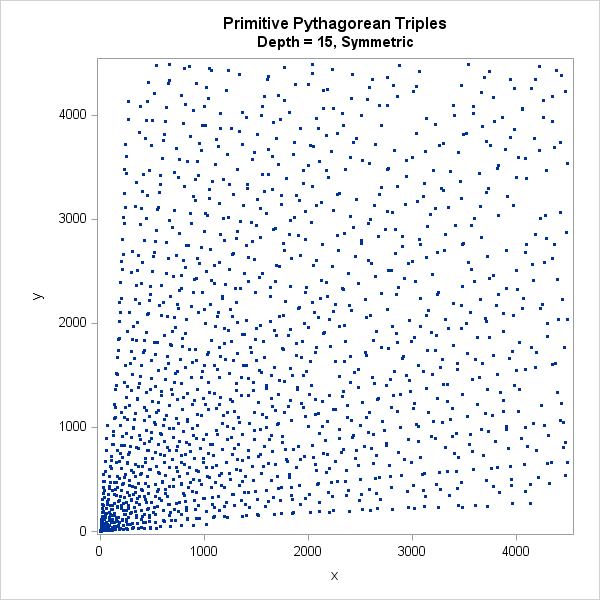 When I studied high school geometry, I noticed that many homework problems involved right triangles whose side lengths were integers. The canonical example is the 3-4-5 right triangle, which has legs of length 3 and 4 and a hypotenuse of length 5. The triple (3, 4, 5) is called a Pythagorean triple because it satisfies the Pythagorean theorem: 32 + 42 = 52. Similarly, (5, 12, 13) and (7, 24, 25) are Pythagorean triples that sometimes appear in geometry textbooks.

Because my high school geometry book reused the same three or four triples over and over again, I assumed that it is difficult to generate Pythagorean triples. In fact, that is not the case: There are several formulas for generating Pythagorean triples, some of which were known to the ancient Greeks.

That is a fabulous result. It means that you can write a program that uses matrix multiplication to produce arbitrarily many primitive Pythagorean triples, as follows:

You can implement this algorithm in the SAS/IML matrix language as follows:

The parent and the first three generations account for 1 + 3 + 9 + 27 = 40 triples. The list contains some old familiar friends, as well as a few strangers that I haven't met before.

The distribution of Pythagorean triples

What do the Pythagorean triples look like if you plot their location in a Cartesian coordinate system? It turns out that they make fascinating patterns!

Because the hypotenuse length is a function of the leg lengths, it suffices to plot the locations of a and b in the coordinate plane. However, it turns out that when the algorithm produces a particular triple such as (5, 12, 13), it does not produce the symmetric triple (12, 5, 13). To make the pattern more symmetric, we can to manually add the triple (b, a, c) whenever the triple (a, b, c) appears.

The following SAS/IML statements construct many primitive Pythagorean triples and create a scatter plot of the ones for which a and b are both less than 4,500:

The image is shown at the beginning of this article. You can see certain parabolic curves that have a high density of points. There is a similar plot in Wikipedia that includes nonprimitive triples. The nonprimitive triples "fill in" some of the apparent "gaps" in the pattern.

These interesting patterns hint at deep relationships in number theory between Diophantine equations and the geometry of the solutions. Are you tempted to generate a similar image for the generalized equation a3 + b3 = c3? Don't bother: Fermat's Last Theorem states that this equation has no integer solutions!