For the cyptanalyst or recreational puzzle solver, "double double" does not lead to toil or trouble. Just the opposite: The occurrence of a double-letter bigram in an enciphered word puzzle is quite fortunate. Certain double letters appear more frequently in English text than other double letters, which means that double letters can help the cryptanalyst use frequency analysis to solve simple substitution ciphers.

For example, in the famous ten-word quote at the top of this article, the double letter 'BB' occurs in the word 'bubble.' Suppose we count all instances of double letters in the complete speech by the three witches at the beginning of Act IV of Macbeth. In the witches' 210-word incantation, the following double letters appear:

Of course, 210 words is not a very long chunk of text, and the witches' incantation is not typical of modern English text. Nevertheless, we can see from this simple exercise that some double letters appear more frequently than others. Presumably some double letters never occur (QQ and JJ, anyone?).

The frequency of double letters in an English corpus

Are the double letters in the witches' speech representative of the frequency with which double letters occur in a typical English text? To find out, let's take another look at the frequency of bigrams in Peter Norvig's analysis of a huge 744-billion-word corpus of documents that were digitized at Google. The following SAS/IML statements continue the program that analyzes bigrams. The matrix M is a 26 x 26 matrix that contains the proportion of every bigram in the corpus:

How to make sense of certain rare bigram frequencies?

I find it puzzling that the bigrams AA appear as often as the bigram ZZ. I would think articles about blizzards, puzzles, jazz, and pizza would completely swamp the few articles about aardvarks. I think the resolution to this quandary is that the corpus includes proper nouns, not just dictionary words. The double-A bigram will show up every time that there is a mention of AA and AAA batteries, the American Automobile Association (AAA) and proper nouns such as Paas egg-dying kits, Alderaan, and any boy named Aaron, Isaac, Jamaal, or Rashaad.

The distribution of frequencies for common bigrams

The following SAS/IML statements create a graph that shows the most common double-letter bigrams: 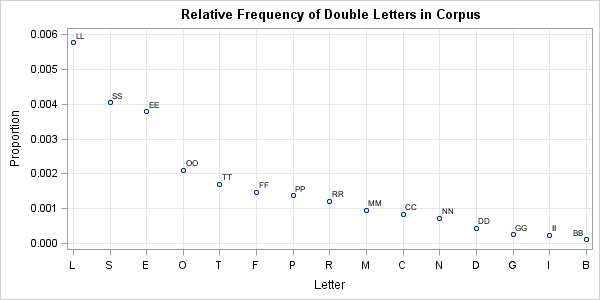 Returning to the Three Witches' incantation in Macbeth, we note that the most common double letters in the speech are different from the most common letters in the Google corpus. This is to be expected: the frequencies in a small sample almost always deviate from the frequencies in a population or in a large sample. Nevertheless, there is some similarity. The OO bigram is the most frequent double-letter bigram in the witches' speech, and it is also fairly common (#4) among all double-letter bigrams in the Google corpus. The LL bigram also appears frequently in the incantation and in the corpus (#1). However, the BB bigram appears much more often in the incantation than would be expected by looking at the corpus because the "double double... caldron bubble" refrain is repeated four times in the short passage.

This leads to an interesting statistical question: how much variation is there in the frequencies? The Google corpus provides an estimate for frequencies "in the wild," which we can think of as being extremely close to the frequencies in the "population" of all written English text. Obviously a random passage of text of a certain length will exhibit sample variation. There is also variation due to the type of text. The distribution of words (and therefore letters) is different between scholarly writing, journalism, poetry, and Twitter messages. (U think? AFAIK, LOL!)

In a future blog post, I will discuss the variation in these frequencies. Then I think it is time to get "cracking" and apply all this frequency analysis to the problem of solving a simple substitution cipher such as you might encounter in the Cryptoquote word puzzle.