What is a prediction ellipse?

A prediction ellipse is a region for predicting the location of a new observation under the assumption that the population is bivariate normal. For example, an 80% prediction ellipse indicates a region that would contain about 80% of a new sample that is drawn from a bivariate normal population with mean and covariance matrices that are equal to the sample estimates.

How to draw a prediction ellipse in SAS 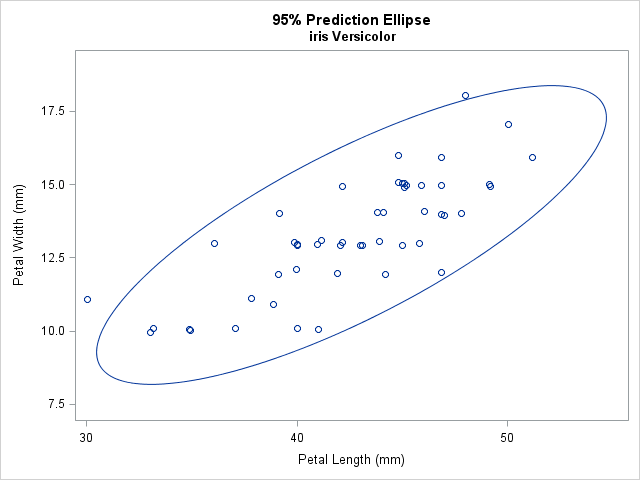 The JITTER option (which requires SAS 9.4) is used to slightly displace some of the observations. Without the option, some markers overlap because the data are rounded to the nearest millimeter. By default, the ELLIPSE statement computes and displays a 95% prediction ellipse, which tends to surround most of the data. However, you can use the ALPHA= option to display a 100(1-α)% prediction ellipse. Some researchers recommend overlaying a 68% prediction ellipse (ALPHA=0.32) because 68% is the probability of observing univariate normal data that is within one standard deviation of the mean. See the article by Michael Friendly for examples and a discussion.

Draw prediction ellipses for each group

Occasionally, you might want to overlay prediction ellipses for subsets of the data that correspond to subpopulations. For example, if your data contain both male and female subjects, it might be that the means and covariance for the variables are different between males and females. In that case, overlaying a prediction ellipse for each subpopulation helps you to visualize how characteristics vary between the groups.

There are several ways to draw prediction ellipses for groups within the data. Michael Friendly provides a macro that uses SAS/GRAPH to overlay ellipses. It supports a grouping variable, as shown in his 2006 paper in J. Stat. Soft. (This macro has been used in some examples by Robert Allison.)

Edit: Great news! The GROUP= option is supported for the ELLIPSE statement in PROC SGPLOT as of SAS 9.4M3. You not longer need to use the following trick. I will leave it for people who are running older versions of SAS.

If you want to use ODS statistical graphics to display the multiple ellipses, you need to use a little trick. Because the ELLIPSE statement in PROC SGPLOT does not support a GROUP= option as of SAS 9.4m2, you have to reshape the data so that each group becomes a new variable. This is equivalent to transposing the data from a "long form" to a "wide form." From my previous blog post, here is one way to create six variables that represent the petal length and width variables for each of the three species of iris in the sashelp.iris data set:

Now that the data are in separate variables, call PROC SGPLOT to overlay three scatter plots and three 95% prediction ellipses: 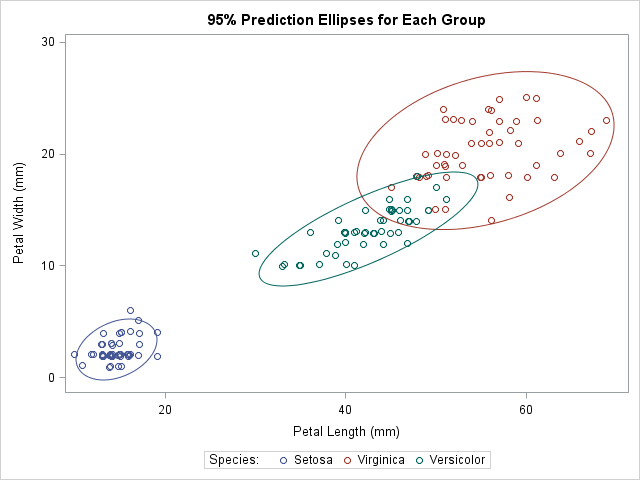 Notice that I used a trick to make the color of each prediction ellipse match the color of the data to which it is associated. The colors for markers in the scatter plots are assigned automatically according to the current ODS style. The style elements used for the markers are named GraphData1, GraphData2, and GraphData3. When I create the ellipses, I use the LINEATTRS= statement to set the style attributes of the ellipse to match the corresponding attributes of the data.

The graph visualizes the relationship between the petal length and the petal width variables in these three species. At a glance, three facts are evident:

In summary, it is easy to use the ELLIPSE statement in PROC SGPLOT to add a prediction ellipse to a scatter plot. If you want to add an ellipse for subgroups of the data, use the trick from my previous article to reshape the data. Plotting ellipses for subgroups enables you to visually inspect covariance and correlation within groups and to compare those quantities across groups. In my next blog post, I will show how to create and plot prediction ellipses directly from a covariance matrix.