My last blog post showed how to simulate data for a logistic regression model with two continuous variables. To keep the discussion simple, I simulated a single sample with N observations. However, to obtain the sampling distribution of statistics, you need to generate many samples from the same logistic model. This article shows how to simulate many samples efficiently in the SAS/IML language. The example is from my book Simulating Data with SAS.

The program in my previous post consists of four steps. (Or five, if you count creating a data set as a separate step.) To simulate multiple samples, put a DO loop around Step 4, the step that generates a random binary response vector from the probabilities that were computed for each observation in the model. The following program writes a single data set that contains 100 samples. Each sample is identified by an ordinal variable named SampleID. The data set is in the form required for BY-group processing, which is the efficient way to simulate data with SAS.

You can call PROC LOGISTIC and specify the SampleID variable on the BY statement. This will produce a set of 100 statistics. The union is an approximate sampling distribution for the statistics. The following call to PROC LOGISTIC computes 100 parameter estimates and saves them to the PE data set.

Notice that the call to PROC LOGISTIC uses the NOPRINT option (and the NONOTES option) to suppress unnecessary output during the simulation. 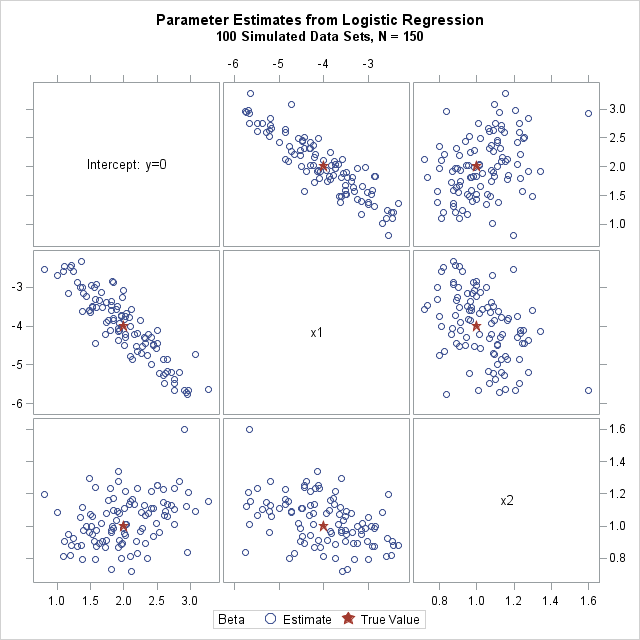 The scatter plot matrix shows pairwise views of the sampling distribution of the three regression coefficients. The graph shows the variability of these estimates in a logistic model with the specified design matrix. It also shows how the coefficients are correlated.