Bootstrap methods and permutation tests are popular and powerful nonparametric methods for testing hypotheses and approximating the sampling distribution of a statistic. I have described a SAS/IML implementation of a bootstrap permutation test for matched pairs of data (an alternative to a matched-pair t test) in my paper "Modern Data Analysis for the Practicing Statistician" (Wicklin, 2010, pp 11–14).

Suppose the null hypothesis is true and the groups are not really different (in terms of the measured variable). If this is the case, then the observations are exchangeable between the different groups. That is, the labels that are associated with particular values, identifying them as belonging to a particular group, could be randomly shuffled (permuted) and a new value of [a test statistic]could be obtained.


In a matrix language such as SAS/IML, data is often packed into a matrix with n rows and k columns. (That is, the data are stored in "wide form," as opposed to the "long form" that would be used by the ANOVA or GLM procedures.) One way to implement a permutation test for ANOVA is to apply a permutation to the k elements in each row. The purpose of this article is to provide an efficient way to permute elements within each row of a matrix.

How to permute elements within rows?

Let's start by defining some data and reading the data into a SAS/IML matrix:

One approach to permute the elements of each row would be to loop over the rows and apply the RANPERM function to each row. That approach is fine for small data sets, but it is not a vectorized operation. To efficiently permute elements within each row, I will use three facts:

By using these three facts, you can construct a function that independently permutes elements of the rows of a matrix: 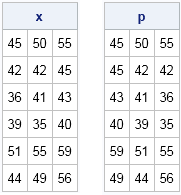 The PermuteWithinRows function is very efficient and can be used inside a loop as part of a permutation test. You can also use this technique to implement random permutations in an experimental design.