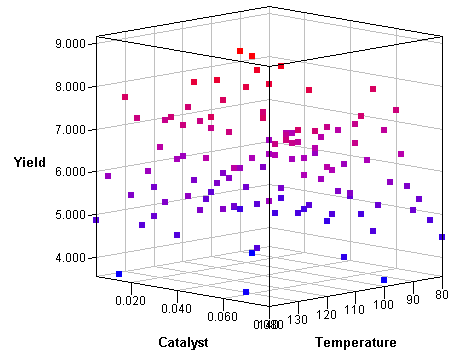 When I visualize three-dimensional data, I prefer to use interactive graphics. For example, I often use the rotating plot in SAS/IML Studio (shown at the left) to create a three-dimensional scatter plot. The interactive plot enables me to rotate the cloud of points and to use a pointer to select and query the values of interesting points.

However, in blog posts, conference proceedings, and slideshow presentations, I often need to display a static visualization of three-dimensional data. Of course I can display a static snapshot of the rotating plot, as I've done here, but there are other options, including using the G3D procedure in SAS/GRAPH software to create a static 3-D scatter plot of the data.

A third option is to draw a two-dimensional scatter plot and color the observations by the value of a third variable. This is a useful technique in many situations, such as visualizing the relationship between two variables while indicating the value of a third variable. The following 2-D scatter plot shows the same data as in the 3-D rotating plot at the top of this article: 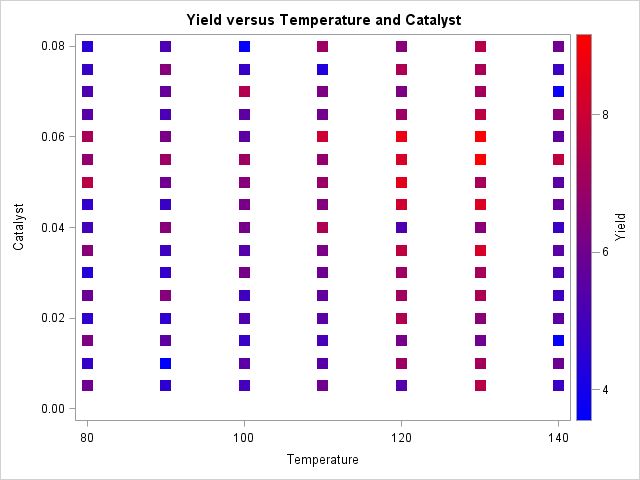 The data are from the documentation for the GAM procedure in SAS/STAT software and depict an experiment in which the yield of a chemical reaction is plotted against two control variables. The temperature of the solution and the amount of catalyst added to the solution were both varied systematically and independently on a uniform grid of values. From this scatter plot you can quickly see that the yield tends to be high when the temperature is in the 120–130 range and the amount of catalyst is between 0.04 and 0.07.

Coloring markers by a continuous variable

It is easy to color markers according to the value of a discrete variable: use the GROUP= option on the SCATTER statement in PROC SGPLOT. But how can you create the previous scatter plot by using the SG procedures in SAS?

As of SAS 9.4, the SGPLOT procedure does not enable you to assign colors to markers based on a continuous variable. However, you can use the Graph Template Language (GTL) to create a template that creates the plot. The trick is to use the MARKERCOLORGRADIENT= and COLORMODEL= options on the SCATTERPLOT statement to associate colors with values of a continuous variable. The following template creates a scatter plot with markers that are colored according to a blue-red color ramp:

A few comments on the GTL template:

Tip: The plot will suffer from overplotting if there are two or more observations that have the same (x, y) coordinates but different z coordinates. You can still use this technique, but you might want to sort the data by the response variable. This will create a plot where the high values of the response variable are apparent because they are plotted on top of the lower values. For example, if the purpose of your plot is to demonstrate that light cars with small engines are more fuel efficient than larger vehicles, sort the Sashelp.Cars data set by the MPG_City variable before you create the scatter plot, as follows: 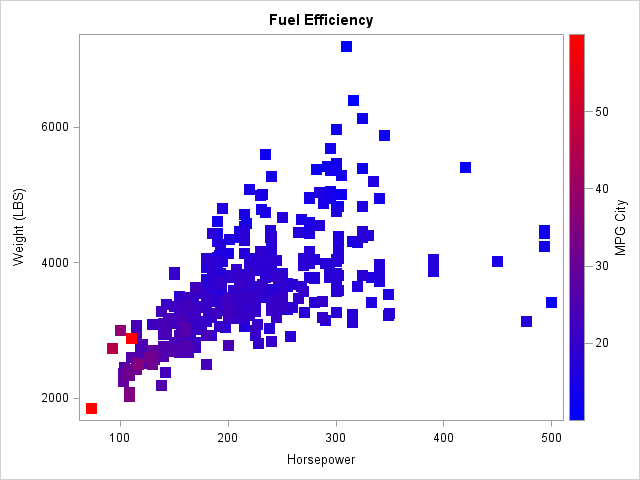 You can download the data and the program that creates these scatter plots. This GTL template is easily modified to support other color ramps, transparent markers, and othe options. Enjoy!