On Kaiser Fung's Junk Charts blog, he showed a bar chart that was "published by Teach for America, touting its diversity." Kaiser objected to the chart because the bar lengths did not accurately depict the proportions of the Teach for America corps members.

The chart bothers me for another reason: I think if you create a graph that purports to demonstrate racial diversity, your graph should provide as reference the national percentages of each racial group. In general, if you claim that your organization does something better than a benchmark, you should include the benchmark values. (For mutual fund companies, comparing performance to a benchmark index is not just a good idea, it is the law.)

It turns out that the U.S. Census Bureau does not count "Latino" as a racial or ethnic group, but I used data and information from the 2010 US census to estimate the racial distribution of the US population. The following data and graphs compare the diversity of Teach for America to the national percentages: 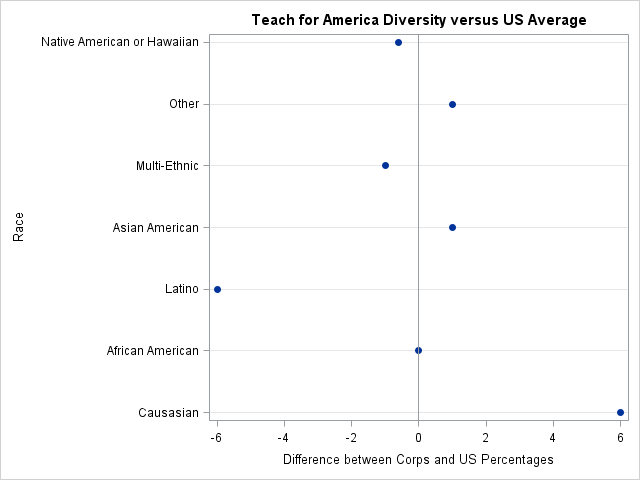 However, as I've said recently, when you are comparing two groups, you should strongly consider creating a graph of the difference between the two groups. The differences are shown in the adjacent figure. (Click to enlarge.) The graph shows that there is not much difference between the diversity of Teach for America and the US population. Five of the seven racial groups are within a percentage point of the national average. Latinos are underrepresented in the Teach for America corps, whereas Caucasians are overrepresented.

When visualizing differences, sometimes it is useful to compute relative differences. Caucasians are a large ethnic group, so although a deviation of 6 percentage points is large in absolute terms, it is small in relative terms. To create this graph by using PROG SGPLOT, specify the RelDiff variable instead of the Diff variable.

It is worth noting that SAS software makes it easy to graph and analyze data like these. The TABLES statement in the FREQ procedure supports a TESTP= option that enables you to specify proportions for a chi-square test for proportions. You can also request a DeviationPlot, which shows the relative differences between the observed proportions and the specified proportions. To use PROC FREQ, you should convert the percentages into frequencies. The Teach for America Web site says that there were 11,000 teachers in the program in 2013, so I will use that number to convert the percentages into frequencies. 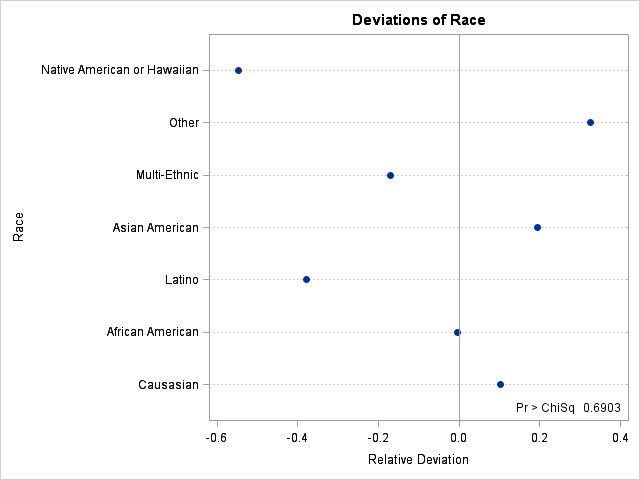 In summary, if you claim that certain quantities are as good as or better than some benchmark, include the benchmark as part of your graph. Even better, graph the difference between your quantities and the benchmark. SAS software provides tools to construct the graphs by hand, or as part of a statistical test for proportions.