However, sometimes you don't just want to see a picture of the contours, you actually want to compute a sequence of points along a specific contour. There are several algorithms for computing contours, but this article describes a technique known as a continuation method, or a predictor-corrector algorithm. 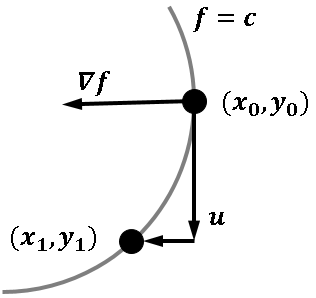 Because the algorithm uses gradient information, it is often possible to form the tangent vector analytically. To give a simple example, suppose that you are interested in tracing the level set {(x,y} | f(x,y)=0} where f is the quadratic function, f(x,y) = x2 + 4y2 - 4. The gradient vector is (2x, 8y). For this function, the contour is an ellipse that passes through the point (2, 0).

Now the interesting fact about the predictor-corrector algorithm is this: the contour-tracing algorithm described above is the same as the predictor-corrector algorithm that is used to solve differential equations! Let G be a vector field that is perpendicular to the gradient field. Then the contour that passes through (x0, y0) is exactly the same as the trajectory of G with initial condition (x0, y0). (For contours that are not closed curves, you also need to integrate "backwards" by using the vector field -G, which is also perpendicular to the gradient field.)

By a fortunate coincidence, I blogged last week about how to solve differential equations in SAS. Although I didn't say it at the time, the phase portraits for the simple harmonic oscillator and the pendulum are plots that show contours. The trajectories are level sets of the "total energy function," which is the sum of the potential and kinetic energies for those mechanical systems.

The following call to the ODE subroutine computes a contour for the quadratic function. It is the level set for 0, which passes through the point (2, 0). 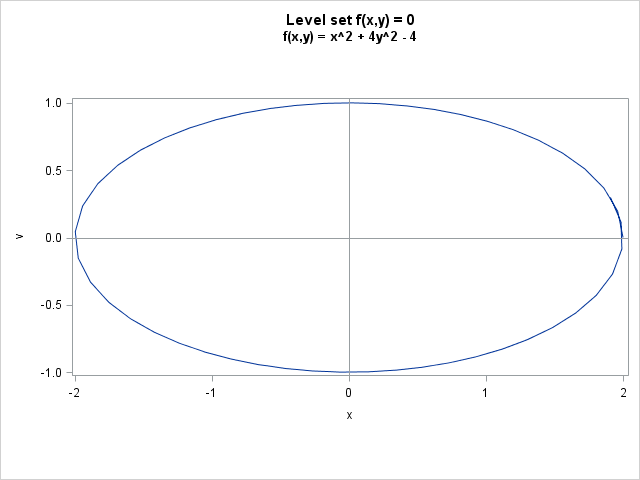 The take-away message is this: you can compute (nonsingular) contours by integrating a vector field that is perpendicular to the gradient field. The same predictor-corrector algorithm that solves differential equations can be used to trace contours.