Editor's Note: My 8th grade son, David, created a poster that he submitted to the 2013 ASA Poster Competition. The competition encourages students to display "two or more related graphics that summarize a set of data, look at the data from different points of view, and answer specific questions about the data." In this guest blog, David explains his experiment and analysis. All prize-winning posters are featured in the August 2013 issue of Amstat News.
-- Rick 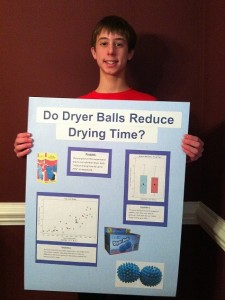 Hi! My name is David Wicklin. This blog post describes a research project and statistical graphs that I created for the 2013 ASA Poster Competition.

My poster began one day when my sister saw a small box on a store shelf that contained two spiked plastic balls. The balls were about the size of tennis balls. The box said that you should put these "dryer balls" in your dryer with a load of wet laundry. The box claimed that the balls would "reduce drying time by up to 25%." I was skeptical. Could putting plastic balls in the dryer really reduce drying time? I was looking for a project for my school science fair, so I decided to conduct an experiment to find out.

My family's dryer has a "dampness sensor" that beeps when a load of laundry is dry. I decided to use this feature and a stop watch to determine the drying time for a load of laundry. For half the loads, I'd toss in two dryer balls. For others I would not. 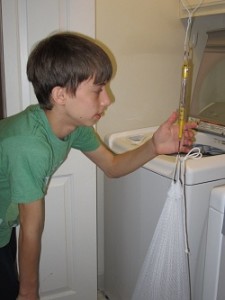 The first issue was how to design the experiment. One option was a controlled experiment in which I would select clothes of different materials (jeans, sweatshirts, tee shirts, and so forth) and different quantities (small, medium, and large loads). I would wash and dry each load twice: once with dryer balls and once without. That would make comparing drying times easy because the only varying factor would be the dryer balls; the clothes would be exactly the same.

However, from a practical point of view, a controlled experiment was not ideal. It would require wasting time and energy to wash and dry items twice. Plus, my family had real laundry that needed washing and drying! My dad suggested that we wash the regular family clothes and compare the mean drying times. If I washed enough laundry, I should be able to account for the random differences between the loads, such as the materials being dried. I would weigh the clothes to keep track of the size of the load.

I got my mom to agree to let me dry our family's laundry over the next few months. As you might suspect, she was very much in favor of this activity! I dried a total of 40 loads of laundry. For each load, I weighed the wet clothes by using a spring scale. For 20 randomly selected loads, I added two dryer balls to the dryer. The other 20 loads had no balls, just the clothes. Each load was dried using the same dryer setting. All types of clothing were used to randomize the samples. For each load, I recorded the weight and the drying time in a notebook.

Analyzing and graphing the data 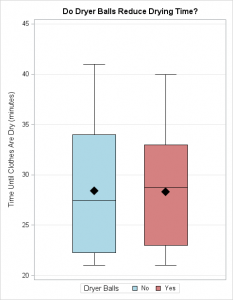 The box and whisker diagram shows that it does not matter if you add dryer balls or not. If dryer balls really "reduce drying time by up to 25%," I would expect the red box plot to be shifted down by 5–8 minutes as compared to the blue box. It isn't. The two boxes are essentially the same. 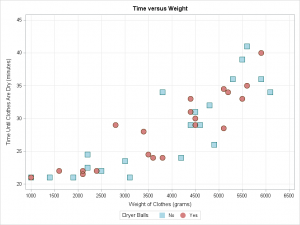 The scatter plot shows that dryer balls do not affect drying time whether it is a heavy load or a light one. For light loads, it takes about 22 minutes to dry the laundry. For heavy loads it takes about 35 minutes. The red and blue markers are mixed together. If dryer balls actually reduce drying time, I would expect the red markers to be mostly below the blue markers.

A limitation of my experiment is that I only used one washer and dryer. Our family's dryer is fairly new and our washer is "high efficiency," which means that it spins out a lot of the water. I have not done the experiment with an older, conventional, washer.

Based on my results, I conclude that the mean drying time does not depend on whether dryer balls are used. In particular, dryer balls do not “reduce drying time by up to 25%.” The observed difference was about 1%, but that could be due to randomness. The time required to dry clothes depends on the weight of the wet clothes, but using dryer balls does not make any difference in the time it takes to dry the clothes, whether the load is small or large. 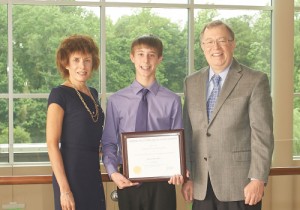 I am very happy to report that this poster was awarded second place in the nation for the 7–9 grade level! I am excited to be chosen for this honor. I have to thank my dad because without him I never would have been motivated enough to make this poster or record and plot 40 loads of laundry.

I got presented the award at a very special ceremony that featured the 2013 president of the ASA, Marie Davidian, a professor in the Statistics Department at NC State University. Also at the ceremony was the 2012 president, Bob Rodriguez, a senior director at SAS. They gave me a plaque and I told them all about my project. They were really nice and very friendly. It really meant a lot to me that they would take time out of their busy day to show interest in my poster and to encourage me to pursue science and math in the future.