When a categorical variable has dozens or hundreds of categories, it is often impractical and undesirable to create a bar chart that shows the counts for all categories. Two alternatives are popular:

As described in the previous article, you can use PROC FREQ to tabulate the counts of observations. The following statements count the number of different vehicles for car manufactures in the Sashelp.Cars data set. The FreqOut data set is sorted in descending order by the Count variable.

Main step: Create the "Others" category by aggregating small categories

In order to create the new category, just sum the counts of the small categories. For example, if you intend to show the 20 largest categories, sum the counts of categories 21, 22, 23, and so forth. There are several ways to do this. For me, the SAS/IML language is to most compact:

The vertical concatenation operator (//) was used to append the "Others" category and counts to the Top 20. You can now create the bar chart by calling the SGPLOT procedure, as follows: 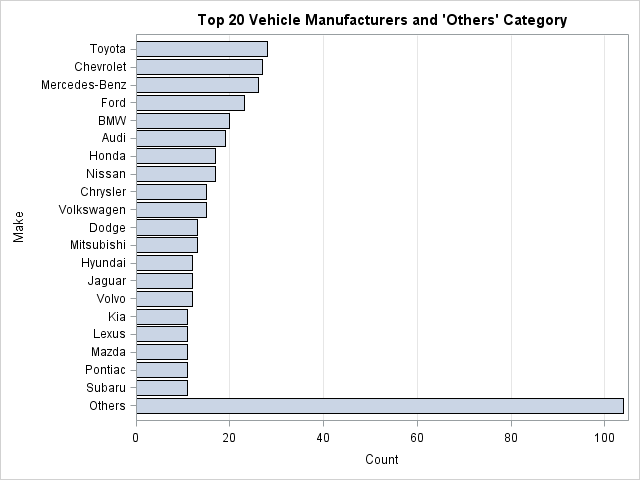 The graph shows that Toyota, Chevrolet, and other companies produce many different models, but that collectively the companies that manufacture 10 or fewer models produce more than 100 models. Advantages of the "Others" category include:

Other ways to compute the "Others" category

You could argue that using SAS/IML to add a series of numbers is overkill. However, when I tried to use the DATA step, I realized that I potentially need to change the length of the categorical variable. If the length of the categorical variable is less than six, the word "Others" gets truncated. I am not aware of any way to change the length of a character variable "dynamically" in the DATA step, whereas in PROC IML the concatenation operator ensures that c = c // "Others" always has space for at least six characters.

In the following code, I follow a suggestion made by Chris Hemedinger and create a macro variable that is always greater than or equal to six. That macro variable is then used in a LENGTH statement to ensure that the categorical variable can hold the string "Others":

The Others2 data set is identical to the Others data set that was created by PROC IML. However, my Base SAS implementation is not as compact as the SAS/IML version. Perhaps you can do better? Let me know in the comments.