The New York Times has an excellent staff that produces visually interesting graphics for the general public. However, because their graphs need to be understood by all Times readers, the staff sometimes creates a complicated infographic when a simpler statistical graph would show the data in a clearer manner.

A recent graphic was discussed by Kaiser Fung in his article, "When Simple Is too Simple." Kaiser argued that the Times made a poor choice of colors in a graphic (shown at right) that depicts the proportion of women in certain jobs and how that proportion has changed between 1980 and 2010.

I agree with Kaiser that the colors should change, and I will discuss colors in a subsequent blog post. However, I think that the graph itself suffers from some design problems. First, it is difficult to see overall trends and relationships in the data. Second, in order to understand the points on the left side of the graph, you have to follow a line to the right side of the graph in order to find the label. Third, the graph is too tall. At a scale in which you can read the labels, only half the graph appears on my computer monitor. If printed on a standard piece of paper, the labels would be quite small.

You can overcome these problems by redesigning the graph as a scatter plot. I presume that the Times staff rejected the scatter plot design because they felt it would not be easily interpretable by a general Times reader. Another problem, as we will see, is that a scatter plot requires shorter labels that the ones that are used in the Times graphic. 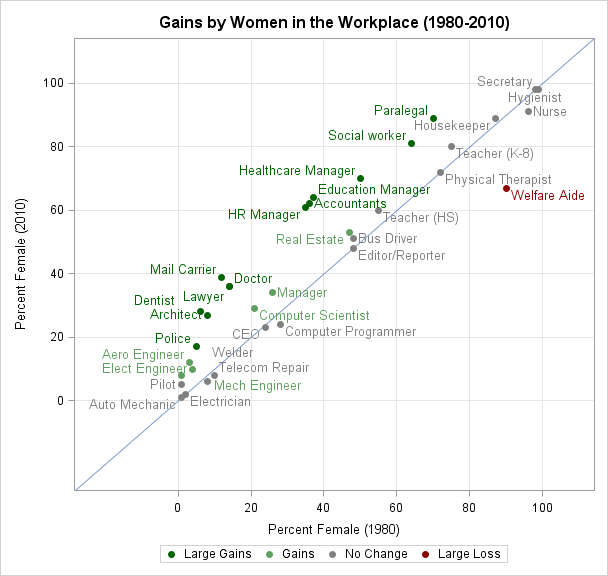 The markers are colored on a red-green scale according to the gains made by women. Large gains (more than 10%) are colored a dark green. Lesser gains (between 5% and 10% are a lighter green. Similarly, jobs for which the proportion of women declined are shown in red. Small changes are colored gray.

This graph shows the trend more clearly than the Times graphic. You can see at a glance that women have made strides in workplace equity across many fields. In many high-paying jobs such as doctor, lawyer, dentist, and various managerial positions, women have made double-digit gains.

The shortcomings of the graph include using shorter labels for the job categories, and losing some of the ability to know the exact percentages in each category. For example, what is the proportion of females that work as a welfare aide in 2010? Is it 68%, 67%, or 66%? This static graph does not give the answer, although if the graph is intended for an online display you can create tooltips for each point.

For those readers who are interested in the details, you can download the SAS program that creates this plot. The program uses three noteworthy techniques:

What do you think? Which graphic would you prefer to use to examine the gains made by women in the workplace? Do you think that the New York Times readers are sophisticated enough to read a scatter plot, or should scatter plots be reserved for scientific communication?