After my post on detecting outliers in multivariate data in SAS by using the MCD method, Peter Flom commented "when there are a bunch of dimensions, every data point is an outlier" and remarked on the curse of dimensionality. What he meant is that most points in a high-dimensional cloud of points are far away from the center of the cloud.

Distances and outliers in high dimensions

You can demonstrate this fact with a simulation. Suppose that you simulate 1,000 observations from a multivariate normal distribution (denoted MVN(0,Σ)) in d-dimensional space. Because the density of the distribution is highest near the mean (in this case, the origin), most points are "close" to the mean. But how close is "close"? You might extrapolate from your knowledge of the univariate normal distribution and try to define an "outlier" to be any point whose distance from the origin is more than some constant, such as five standardized units.

That sounds good, right? In one dimension, an observation from a normal distribution that is more than 5 standard deviations away from the mean is an extreme outlier. Let's see what happens for high-dimensional data. The following SAS/IML program does the following:

The following graph shows the distance of the closest point to the origin for various dimensions. 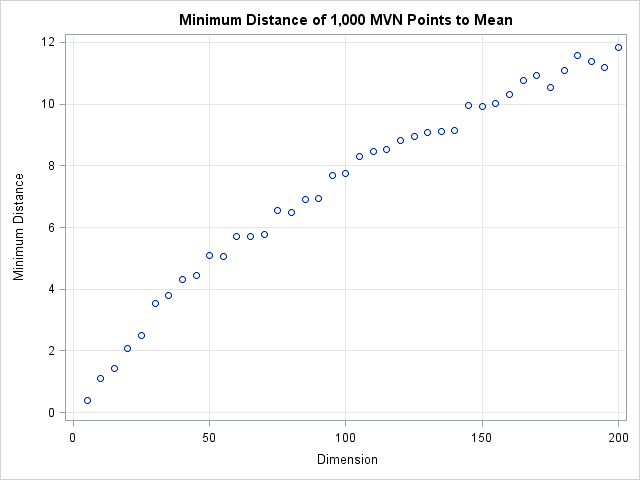 How to define an outlier cutoff in high dimensions

The resolution to this dilemma is to incorporate the number of dimensions into the definition of a cutoff value. For multivariate normal data in d dimensions, you can show that the squared Mahalanobis distances are distributed like a chi-square distribution with d degrees of freedom. (This is discussed in the article "Testing data for multivariate normality.") Therefore, you can use quantiles of the chi-square distribution to define outliers. A standard technique (which is used by the ROBUSTREG procedure to classify outliers) is to define an outlier to be an observation whose distance to the mean exceeds the 97.5th percentile. The following graph shows a the 97.5th percentile as a function of the dimension d. The graph shows that the cutoff distance is greater than the minimum distance and that the two distances increase in tandem. 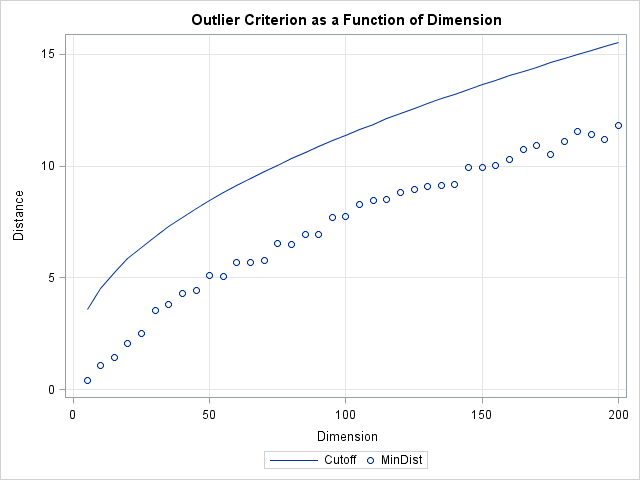 If you use the chi-square cutoff values, about 2.5% of the observations will be classified as outliers when the data is truly multivariate normal. (If the data are contaminated by some other distribution, the percentage could be higher.) You can add a few lines to the previous program in order to compute the percentage of outliers when this chi-square criterion is used:

The following graph shows the percentage of simulated observations that are classified as outliers when you use this scheme. Notice that the percentage of outliers is close to 2.5% independent of the dimension of the problem! By knowing the distribution of distances in high-dimensional MVN data, we are able to define a cutoff value that does not classify every point as an outlier. 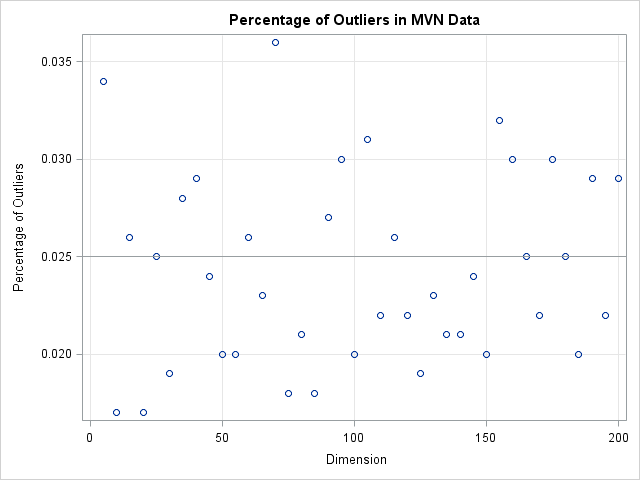 To conclude, in high dimensions every data point is far away from the mean. If you use a constant cutoff value then you will erroneously classify every data point as an outlier. However, you can use statistical theory to define a reliable rule to detect outliers, regardless of the dimension of the data.

You can download the SAS program used in this article, including the code to create the graphs.