Do you know someone who has a birthday in mid-September? Odds are that you do: the middle of September is when most US babies are born, according to data obtained from the National Center for Health Statistics (NCHS) Web site (see Table 1-16).

There's an easy way to remember this fact:
Q: When are most babies born?
A: After Labor day!

The following graph shows the number of weekly births in 2002, normalized so that the mean number of births is represented by 100. This is called the "index of occurrence" by researchers in the Office of Vital Statistics (Martin, et al., 2006). Notice that the peak number of births occurs in weeks 37, 38, and 39, which corresponds to September 9–29, 2002. 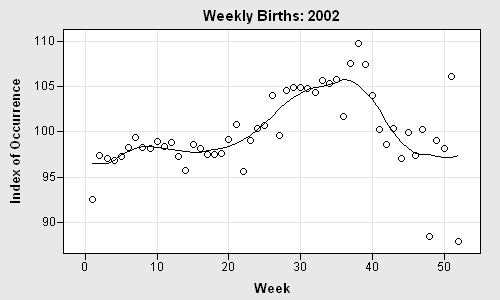 Historically, the number of births peaks during the summer, and is at its lowest during the winter.... Observed birth rates... were at their highest in September and lowest in December.

Perhaps an even more interesting phenomenon is that there is a "man-made" day-of-the-week effect, due to the large number of US deliveries that are induced or delivered by a scheduled cesarean delivery. The following graph, which is taken from the book Statistical Programming with SAS/IML Software, shows the distribution of the 4,021,726 live births in the US for the year 2002. (Click to enlarge.) You can also download the data from the book's Web site.

The shapes and colors of the markers correspond to days of the week. Most US babies are born Tuesday through Friday. Compared with the other weekdays, Mondays have fewer births. The fewest babies are born on weekends and holidays.

Martin, et al., 2006, comment on these patterns and attribute the day-of-week effect to induced labor and cesarean deliveries:

The birth data also indicate a "holiday effect" in which there are fewer babies born on US holidays. In particular, in a great instance of statistical irony, there are fewer babies born on Labor Day (Monday, 02SEP2002) than would be expected for a Monday in September. Can you find the blue circle for Labor Day, 2002, near the bottom of the plot? That value is about 65% less than what would be expected for a non-holiday Monday in September.