It has been a long time since I thought about how to create an ROC curve "by hand," so I decided to do some research. This article describes how to construct an empirical ROC curve and includes a SAS/IML module that implements the algorithm. This is the same curve obtained by Charlie's macro and by the OUTROC= option in the MODEL statement of the LOGISTIC procedure.

To remind myself of the details of ROC curves, I referenced the excellent book ROC Curves for Continuous Data by W. Krzanowski and D. Hand. The notation and ideas in this article are taken from their introduction (p. 2–12) and from an example on p. 41–44.

Suppose each observation in the data is one of two groups, such as diseased and healthy. Call one of the groups P (for "positive") and the other N (for "negative"). It is useful to use the data to build a statistical model. The purpose of the model is to classify future observations into either the P or the N group by using a "score" that is obtained from explanatory variables, such as the results of laboratory tests. (For a more whimsical example, you can predict whether a person is female by knowing how many shoes the person owns.) When the score is large (greater than some threshold, t), you classify the observation into class P; when the score is small (at or below the threshold), you classify the observation into class N.

To construct the ROC curve, they first set the threshold, t, to be a large value. Then (p. 43): 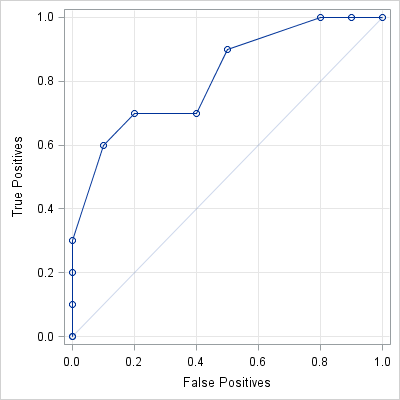 The following SAS/IML module implements the algorithm for the construction of an empirical ROC curve. The input is a vector x that contains the data and a vector y that indicates whether each value belongs to P or N. Instead of counting the number of false positives, it is convenient to compute the number of true negatives (tn), and then use the identity fp = 1 – tn at the end of the module.

The ROC module uses the UNIQUE function to find the cutpoints of the data. (These are the threshold values for which the number of true/false positives changes.) The module counts the number of elements in N (Num0) and P (Num1). Then, for each cutpoint, the algorithm computes the proportion of values less than and greater than the cutpoint.

You can call the ROC module with the example data and obtain the points on the ROC curve:

As Krzanowski and Hand point out (p. 9), disciplines other than statistics have developed these same ideas independently, but use different names. The health sciences use the term sensitivity to mean the true positive rate. They use specificity to mean the true negative rate. That is why the ROC curve produced by the LOGISTIC procedure has axes that are labeled "1 – specificity" and "sensitivity."

Other disciplines use characteristics of the ROC curve other than the area under the curve (AUC). For example, analysts in finance and economics use the Gini index (p. 27–28), which is simply 2*AUC – 1. Charlie H. calls this the "accuracy ratio" in his blog; see also Murphy Choi's article on the Gini index.