The area under a density estimate curve gives information about the probability that an event occurs. The simplest density estimate is a histogram, and last week I described a few ways to compute empirical estimates of probabilities from histograms and from the data themselves, including how to construct the empirical cumulative density function (ECDF).

This article describes how to estimate the density by fitting a parametric curve (for example, a normal curve) to the observed data.

You can use the UNIVARIATE procedure to fit the parameters in a model to data. The UNIVARIATE procedure supports a large number of well-known distributions, and not only fits the model for you (using, typically, a maximum likelihood optimization), but can also graph the results by using ODS statistical graphics.

I will use the same example that I used in my previous article: the cholesterol of 2,873 women in the Framingham Heart Study as recorded in the SAS data set SASHELP.Heart, which is distributed with SAS/GRAPH software in SAS 9.2. The cholesterol data are approximately normal, so I will fit a normal curve to the data to illustrate the technique. You can use the UNIVARIATE procedure to create three relevant items:

The parameter estimates are necessary in order to compute the area under the parametric PDF, so the following statements use the ODS OUTPUT statement to write the ParameterEstimates table to a SAS data set named PE: 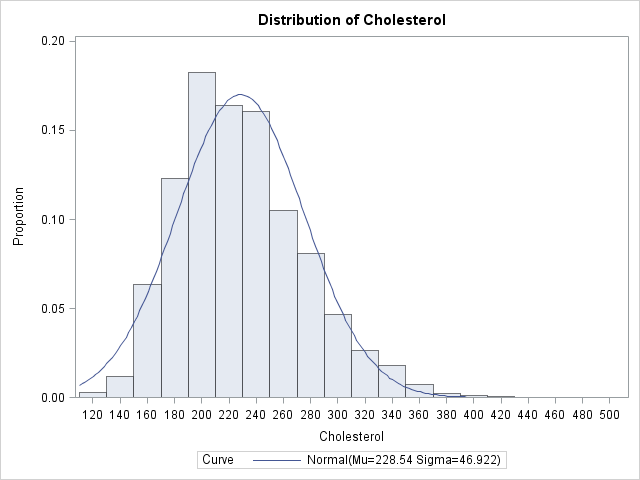 The UNIVARIATE procedure creates the parameter estimates table, as follows:

The Area under a Parametric Density Estimate Curve

Notice that to compute GE240, you use the CDF function to compute the area less than 240 and then subtract that value from the total area under the curve, which is 1.