A reader commented to me that he wants to use the HISTOGRAM statement of the SGPLOT procedure to overlay two histograms on a single plot. He could do it, but unfortunately SAS was choosing a large bin width for one of the variables and a small bin width for the other variable. "The figure looks odd because the bin widths vary so much," he wrote, "so I would like to [set]the width."

He asked me whether it is possible to control the bin width of a histogram from the HISTOGRAM statement. The answer is "not in SAS 9.2, but stay tuned for SAS 9.3!"

So what can you do in SAS 9.2? You can control the histogram bin width by using the Graph Template Language (GTL).

To illustrate this approach, I'll overlay histograms of the SEPALLENGTH and PETALLENGTH variables in the SASHELP.IRIS data set. Most of the statements for the following template are explained in the getting started example in the GTL documentation:

For this particular template:

The RUN statement results in the template being compiled and stored in an output template named DUALHIST. The template is stored in the default template folder, but no graph is produced at this time. 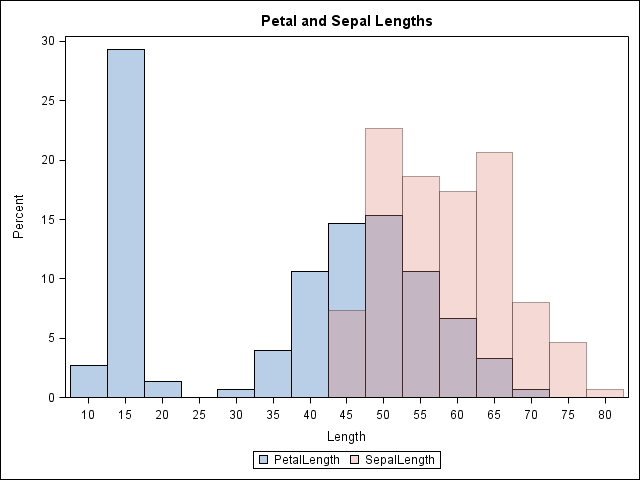