Each Sunday, my local paper has a starburst image on the front page that proclaims "Up to $169 in Coupons!" (The value changes from week to week.) One day I looked at the image and thought, "Does the paper hire someone to count the coupons? Is this claim a good estimate of the actual value of all coupons in the paper? What is the exact value of the coupons in today's paper?"

Furthermore, I wondered about which coupons the image refers to? I assumed that it refers to the contents of special inserts such as SmartSource™ Magazine, RedPlum.com™, and P&G BrandSaver. I call these inserts coupon circulars.

There are other interesting statistical questions that you can ask about Sunday coupons, such as "What is the distribution of the values of coupons? Are $0.50 coupons the most prevalent or are larger values the norm?"

To research these questions, I collected data about the coupons in coupon circulars for 12 Sundays in early 2011. I recorded three kinds of coupons:

I did not count coupons that were part of a store-specific ad, such as for Target or Walgreens.

You can download the data and a SAS program that analyzes the data.

The Distribution of Coupon Values

As I recorded the values of coupons each week, it soon became clear that $1.00 coupons appear most frequently. The following graph (click to enlarge) shows the distribution of denominations of coupons in my Sunday newspaper: 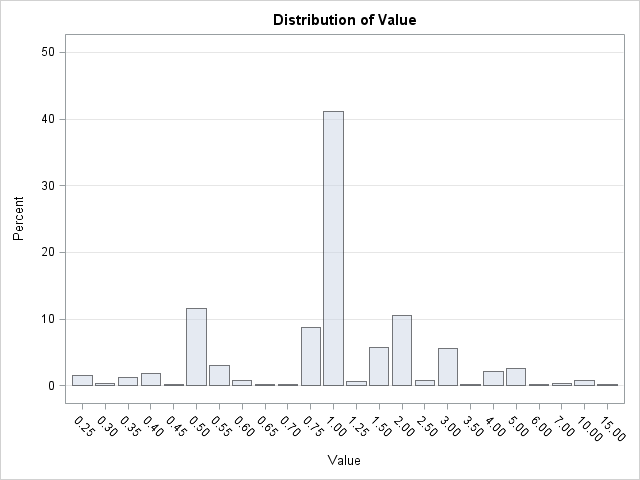 A few statistics are apparent:

Claim versus Reality: How Much Can You Really Save?

The following table sums up the total values of coupons in three categories: general coupons, BOGO coupons, and the store coupons that are intermingled with the other two categories. 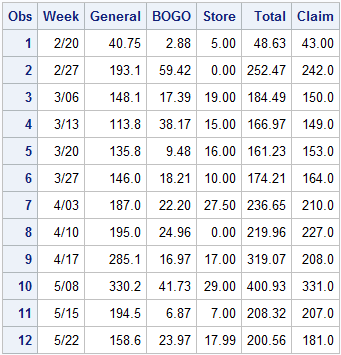 A few facts are apparent: 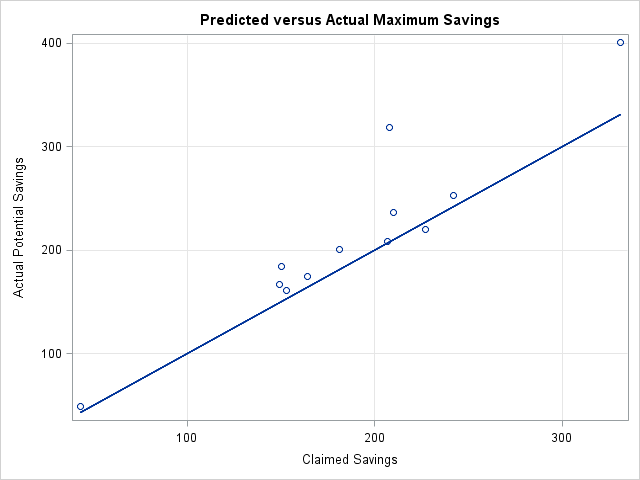 Predicting the Actual Coupons Values from the Advertised Claim

The previous graph indicates a linear relationship between the actual and the claimed values of the coupons. It is interesting to try to use linear regression to predict the total value of the coupons based on the claimed (starburst) values. However, the graph also shows two observations that have high-leverage values for the regression (Weeks 1 and 10) and one value that is an outlier (Week 9). Consequently, you might decide to use the ROBUSTREG procedure to fit a robust regression line to the data. (This is carried out in the downloadable program for least trimmed squares (LTS) regression.)

The LTS regression model (shown in the following graph) states that the expected value of the Sunday coupons is about $11 more than the advertised claim: predicted = $10.87 + claim. In other words, if the newspaper advertises "up to $181 in coupons," the model predicts $192 in coupons. 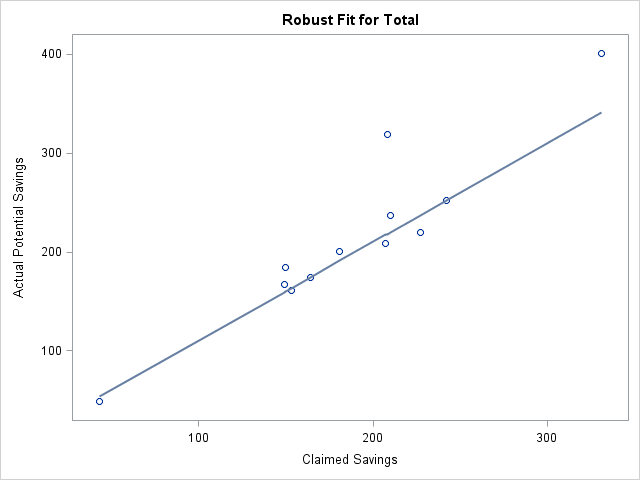 I'm sure there is much more that can be said about these data. Feel free to continue the analysis and let me know what you find!