In last week's article on how to create a funnel plot in SAS, I wrote the following comment:

I have not adjusted the control limits for multiple comparisons. I am doing nine comparisons of individual means to the overall mean, but the limits are based on the assumption that I'm making a single comparison.

This article discusses how to adjust the control limits (called decision limits in the GLM procedure) to account for multiple comparisons. Because the adjustments are more complicated when the group sizes are not constant, this article treats the simpler case in which each group has the same number of observations. For details on multiple comparisons, see Multiple Comparisons and Multiple Tests Using SAS (the second edition is scheduled for Summer 2011).

You can download the new data and all of the SAS statements used in this article. The following statements create the data and run the SAS/QC ANOM procedure to generate the ANOM chart: 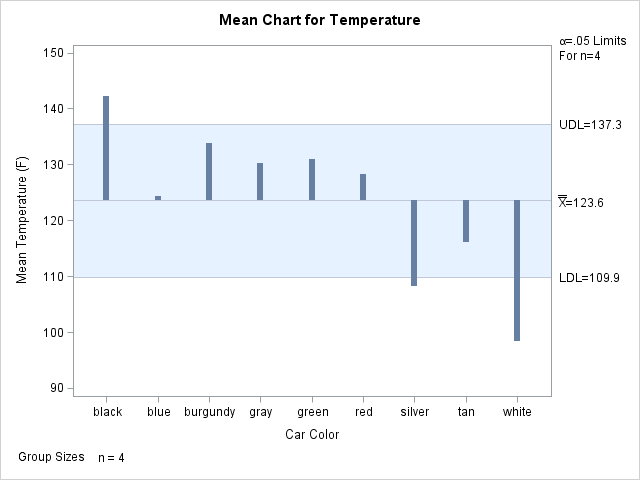 Even for this smaller set of data, it is apparent that black cars are warmer than average and silver and white cars are cooler than average. You can create a similar plot by using the LSMEANS statement in the SAS/STAT GLM procedure.

This value is 123.6, as shown in the ANOM chart. The ANOM chart compares each individual group mean to this central value.

The second component in the computation of decision limits is the variance term. This term measures the accuracy you have when comparing group means to the overall mean. (More variance means less accuracy.) The formula involves the mean square error, which in this case is just the average of the sample variances of the nine groups. For convenience, the following statements define a SAS/IML module that computes the average variance:

The module is then used to compute the variance term:

The final component in forming the ANOM decision limits is the multiplier, h. In elementary statistics, the value 2 (or more precisely, the 0.975 quantile of a t distribution) might be used as a multiplier, but that value isn’t big enough when multiple comparisons are being made. The PROC ANOM documentation states that in a comparison of several group means with the overall mean, the proper value of h is the α quantile of a certain distribution. However, the documentation does not specify how to compute this quantile.

The following statements compute h for α = 0.05 and for the case of nine groups, each with four observations:

All three pieces are computed, so it is easy to put them together to compute the upper and lower decision limits:

Notice that these values are identical to the values graphed by the ANOM procedure.

The computation is finished, but it is interesting to compare the ANOM multiplier with more familiar multipliers from the t distribution.

A classic way to handle multiple comparisons is to use the Bonferroni adjustment. In this method, you divide α by the number of comparisons (9) but continue to use quantiles of the t distribution. By dividing α by the number of groups, you find quantiles that are further in the tail of the t distribution and therefore are larger than the unadjusted values. You can show that the Bonferroni multiplier is a conservative multiplier that will always be larger than the ANOM multiplier.

The following statements compute decision limit multipliers based on an unadjusted t quantile (such as is used for a classical confidence interval for a mean) and on a Bonferroni adjusted quantile. These are printed, along with the multiplier h that was computed previously.