In a previous blog post, I showed how you can use simulation to construct confidence intervals for ranks. This idea (from a paper by E. Marshall and D. Spiegelhalter), enables you to display a graph that compares the performance of several institutions, where "institutions" can mean schools, companies, airlines, or any set of similar groups.

A more recent paper (Spiegelhalter, 2004) recommends doing away with individual confidence intervals altogether. Instead, Spiegelhalter recommends plotting the means of each group versus "an interpretable measure of its precision" and overlaying "control limits" similar to those found on a Shewhart control chart.

This article shows how to create a funnel plot in SAS. You can download the data and the SAS program used in this analysis.

Spiegelhalter lays out four steps for creating the funnel plot that displays the mean of a continuous response for multiple groups (see Appendix A.3.1):

The Temperature of Car Roofs in a Parking Lot

The data for this example are from an experiment by Clark Andersen in which he measured the temperature of car roofs in a parking lot. He observed that black and burgundy cars had the hottest roofs, whereas white and silver cars were cooler to touch.

Andersen measured the roof temperatures of 52 cars on a mild (71 degree F) day. The cars were of nine colors and 4–8 measurements were recorded for each color. You could rank the car colors by the mean temperature of the roof (remember to include confidence intervals!) but an alternative display is to plot the mean temperature for each car color versus the number of cars with that color. You can then overlay funnel-shaped "control limits" on the chart.

The funnel plot is shown below. (Click to enlarge.) The remainder of this post shows how to create the graph. 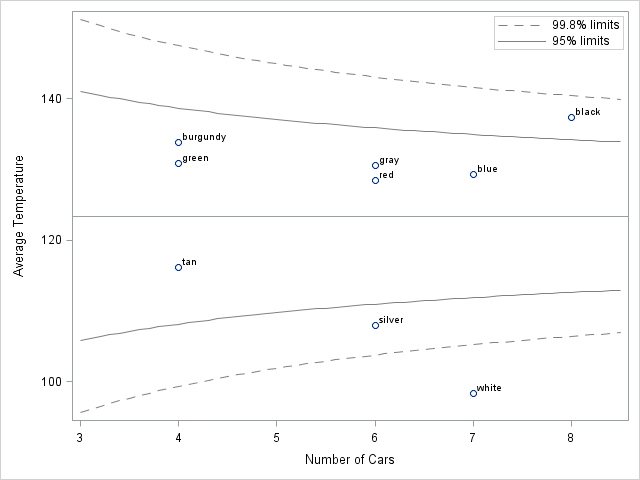 Computing the Mean of Each Category

The following statements read the data into SAS/IML vectors:

You can use the UNIQUE/LOC technique to compute the sample size and mean temperature for each color category. The following technique is described in Section 3.3.5 of Statistical Programming with SAS/IML Software:

The following table summarizes the data by ranking the mean temperatures for each color. Although the standard errors are not used in the funnel plot, they are included here so that you can see that many of the confidence intervals overlap. You could use the SGPLOT procedure to display these means along with 95% confidence intervals, but that is not shown here. 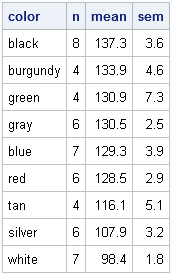 Those car roofs get pretty hot! Are the black cars much hotter than the average? What about the burgundy cars? Notice that the sample means of the burgundy and green cars are based on only four observations, so the uncertainty in those estimates are greater than for cars with more measurements. The funnel plot displays both the mean temperature and the precision in a single graph.

The overall mean temperature is 123 degrees F, with a standard deviation of 16 degrees. The VAR function is available in SAS/IML 9.22. If you are using an earlier version of SAS/IML, you can use the VAR module from my book.

A funnel plot is effective because it explicitly reveals a source of variability for the means, namely the different sample sizes. The following statements compute the control limits for these data:

Notice that the limits variable is a matrix. The expression s/sqrt(n) is a column vector with 56 rows, whereas the row vector z contains four z-scores. Therefore the (outer) product is a 56x4 matrix. The values in this matrix are used to overlay control limits on a plot of mean versus the sample size.

After writing the SAS/IML computations to a data set (not shown here), you can use PROC SGPLOT to display the mean temperature for each car color and use the BAND statement to overlay 95% and 99.8% control limits.

The funnel plot is a simple way to compare group means to the overall average. The funnel-shaped curves are readily explainable to a non-statistician and the plot enables you to compare different groups without having to rank them. The eye is naturally drawn to observations that are outside the funnel curves, which is good because these observations often warrant special investigation.

More advantages and some limitations are described in Spiegelhalter's paper. He also shows how to construct the control limits for funnel plots for proportions, ratios of proportions, odd ratios, and other situations.

Two criticisms of my presentation come to mind. The first is that I've illustrated the funnel plot by using groups that have a small number of observations. In order to make the control limits look like funnels, I used a "continuous" value of n, even though there is no such thing as a group with 4.5 or 5.8 observations! Spiegelhalter's main application is displaying the mean mortality rates of hospitals that deal with hundreds or thousands of patients, so the criticism does not apply to his examples.

The second criticism is that I have not adjusted the control limits for multiple comparisons. I am doing nine comparisons of individual means to the overall mean, but the limits are based on the assumption that I'm making a single comparison. Spiegelhalter notes (p. 1196) that "the only allowance for multiple comparisons is the use of small p-values for the control limits. These could be chosen based on some formal criterion such as Bonferroni..., but we suggest that this is best carried out separately." Following Spiegelhalter's suggestion, I leave that adjustment for another blog post.