Loony. Zany. Brilliant. Hysterical. Those are some of the adjectives I use to describe The Far Side® cartoons by Gary Larson from the 1980s and early '90s.

I recently rediscovered an old book, The Far Side Gallery 2, which collects some of the best of Larson's wonderfully wacky cartoons. Every member of my family has read it multiple times, and we were discussing it at dinner:

"I like the one about the cows," my son said.

"Which one? That's one of Larson's favorite subjects," I replied. "That, and cavemen."

"And bears!" my wife chimed in. "He's always drawing bears."

"Scientists!" my daughter exclaimed. "And cowboys!"

And the more we shared about our favorite cartoons, the more I thought about Larson's choice of subjects for his cartoons. We all agreed that he had favorite subjects that he revisited over and over again: snakes, African animals, bugs, nerds, dinosaurs, ....

So, of course, I had to collect some data!

I used SAS/IML software to generate a random set of pages of The Far Side Gallery 2, and I wrote down the subjects that appeared in 50 cartoons on those pages. I chose subject categories that fit my prior knowledge of the cartoons. "Wild Animals" includes bears, African animals, deer, and wolves. "Prehistoric" includes both dinosaurs and cavemen. "Situation Comedy" is a catch-all category for bizarre situations, such as characters stranded on a desert island.

I analyzed and plotted the data using the ODS statistical graphics that are generated by the FREQ procedure: 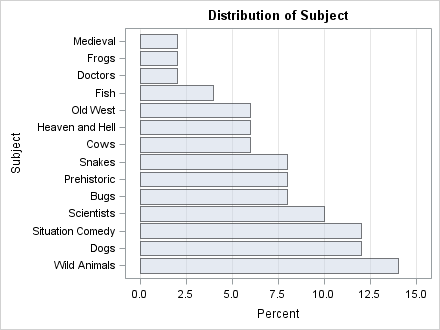 As Stephen King writes in the foreword, "you can't tell a cartoon." However, one of my favorites is a scene of five cavemen thrusting primitive shovels in the air and howling cries of victory as they carry a 15-foot-long carrot on their shoulders. The caption: "Early vegetarians returning from the kill."

Do you have a favorite The Far Side cartoon? Leave a description in the comments.