In a previous blog post, I showed how to use the SAS/IML SORT and SORTNDX subroutines to sort rows of a matrix according to the values of one or more columns. There is another common situation in which you might need to sort a matrix: you compute a statistic for each row and you want to order the rows according to the value of that statistic.

The technique that I describe in this article is independent of the size of the matrix. Consequently, I illustrate the technique by using a small 6x3 matrix. The following SAS/IML statements define the matrix and use the mean subscript reduction operator (:) to compute the mean of each row:

The printed output shows the mean for each row. You can use the SORTNDX subroutine to obtain the vector (idx) that sorts the means. If you use that vector as a row subscript for the x matrix, the resulting matrix is sorted according to the row means, as shown in the following statements:

Although this example uses the mean of the rows, it is clear that you can reorder the rows according to the values of any statistic.

Reordering Columns of a Matrix 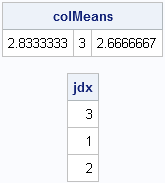 Notice that the vector jdx is used as a column index for the x matrix. Except for that difference, these statements are essentially the same as the statements in the previous section.