I was inspired by Chris Hemedinger's blog posts about his daughter's science fair project. Explaining statistics to a pre-teenager can be a humbling experience.

My 11-year-old son likes science. He recently set about trying to measure which of three projectile launchers is the most accurate. I think he wanted to determine their accuracy so that he would know which launcher to use when he wanted to attack his little sister, but I didn't ask. Sometimes it is better not to know.

He and his sister created a bullseye target. They then launched six projectiles from each of the three launchers and recorded the location of the projectile relative to the center of the target. In order to make the experiment repeatable, my kids aligned each launcher with the target and then tied it down so that it would not move during the six shots.

For each launcher, they averaged the six distances to the center. The launcher with the smallest average distance was declared to be The Most Accurate Launcher in the World. 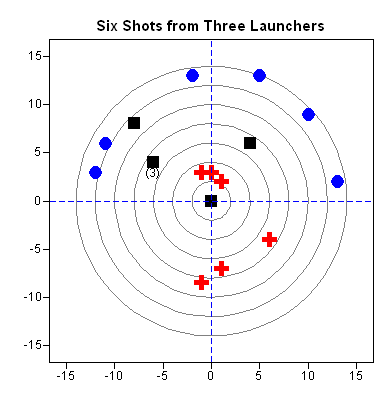 When I saw the target on which they had recorded their results, I had a hard time containing the teacher in me. This target shows two fundamental statistical concepts: bias and scatter.

When I look at the target, the first characteristic I see is bias due to a misalignment of the launchers. Two of the three launchers are aimed too high relative to the bullseye. This kind of experimental error is sometimes known as systematic bias because it leads to measurements that are systematically too high or too low. 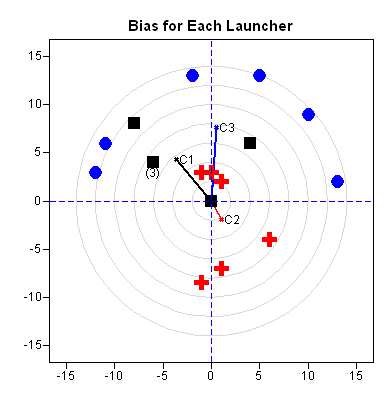 I pointed this out to my son, who shrugged. "I guess the launchers weren't perfectly lined up," he said.

Thinking that perhaps he might want to realign the launchers and re-run the experiment, I asked him what he intended to do about this bias.

He hesitated. I could see the wheels turning in his mind.

I pointed out to my son that the red crosses tend to spread out in the up-down direction much more than they do in the left-right direction. In contrast, the black squares spread in both directions, but, more importantly, the directions tend to vary together. In four out of five cases, a shot that was high was also left of center. This is an example of correlation and covariance.

I asked my son to describe the spread of the blue circles. "Well," he cautiously began, "they vary a little bit up and down, but they are all over the place left-to-right."

"And do the shot locations tend to vary together?" I prompted. 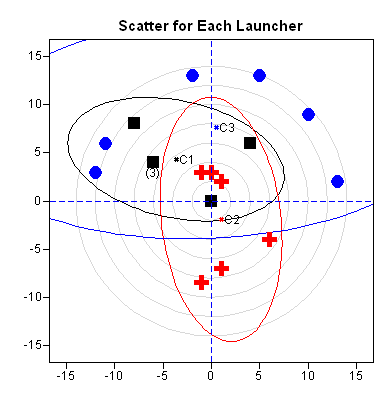 My son ran off to attack his sister, grateful to escape my merciless questioning.

I carefully measured the locations of the data, created a SAS DATA step, and began to analyze the data in SAS/IML Studio.

The third figure shows the center of each group of projectiles. I have also added ellipses that help to visualize the way that the projectiles scatter. (Each ellipse is a 75% prediction ellipse for bivariate normal data with covariance equal to the sample covariance.)

The programming techniques that are used to draw the figures are described in Chapters 9 and 10 of my book, Statistical Programming with SAS/IML Software.