A previous post described a simple algorithm for generating Fibonacci numbers. It was noted that the ratio between adjacent terms in the Fibonacci sequence approaches the "Golden Ratio," 1.61803399.... This post explains why.

In a discussion with my fellow blogger, David Smith, I made the comment "any two numbers (at least one nonzero) can be used to initialize a Fibonacci sequence and the ratio will STILL converge to the golden ratio."

Well, I was only a little bit wrong. Upon further reflection I decided that a better comment would have been "any two POSITIVE numbers." If we consider ALL numbers, including negatives, the correct statement is "any two numbers except those along a particular line through the origin." Which line? It turns out the answer to that question requires reformulating the problem in terms of matrices.

The Origin of Fibonacci Numbers

Fibonacci was a mathematician who was interested in many topics, including population dynamics. A simple model of rabbit reproduction led to the famed Fibonacci sequence. (A nice discussion of this problem is available in a MATLAB e-book by Cleve Moler.) In the Fibonacci sequence, the number of rabbit pairs at time n is determined by sum of the number of pairs at the two preceding units of time:
Pn = Pn-1 + Pn-2.

If you know the initial conditions P0 and P1, then the dynamics of the population are completely determined.

In mathematical terms, this is a discrete dynamical system. In matrix terms, the dynamics are determined by iteration of the Fibonacci matrix.

You can use matrices to explore the Fibonacci dynamics for any initial condition. Let F be the 2 x 2 matrix that moves the population forward one unit in time:

The complete population dynamics are given by iteration of F. For example, the classical Fibonacci sequence has P0=1 and P1=1:

What Happens after Many Iterations?

We see that the Fibonacci matrix has one positive eigenvalue. Wait, is that value the GOLDEN RATIO?! Yes, and I'll get back to that fact.

The dynamics induced by iterating this equation are simple: 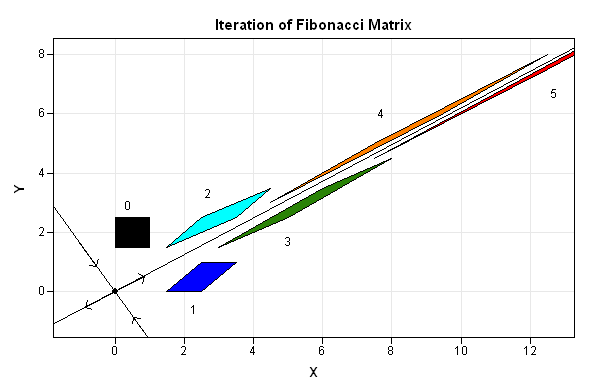 Thus, the ratio between numbers in a Fibonacci sequence approaches the golden ratio, and this statement is solely a property of the rule used to define the dynamical system. In particular, the statement is independent of the numbers used to initialize the sequence, as long as the initial conditions are not on the negative eigendirection.

Who knew matrices could be so much fun?