How to perform mean imputation in SAS 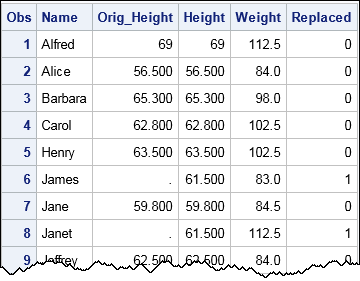 The output shows that the missing data (such as observations 6 and 8) are replaced by 61.5, which is the mean value of the observed heights. For a subsequent visualization, I have included a binary variable (Replaced) that indicates whether an observation was originally missing. The METHOD= option in PROC STDIZE supports several statistics. You can use METHOD=MEDIAN to replace missing values by the median, METHOD=MINIMUM to replace by the minimum value, and so forth.

Most software packages deal with missing data by using listwise deletion: observations that have missing data are dropped from the analysis. Throwing away hard-collected data is painful and can result in a substantial loss of power for statistical tests. Mean imputation, which is easy to implement, enables analysts to use every observation. However, mean imputation has three serious disadvantages that can lead to problems in your statistical analysis. Mean imputation is a univariate method that ignores the relationships between variables and makes no effort to represent the inherent variability in the data. In particular, when you replace missing data by a mean, you commit three statistical sins:

These problems are discussed further in a subsequent article. Most experts agree that the drawbacks far outweigh the advantages, especially since most software supports modern alternatives to single imputation, such as multiple imputation. My advice: don't use mean imputation if you can use a more sophisticated alternative.

When I was in college, an actor friend smoked cigarettes. He knew that he should stop, but his addiction was too strong. When he lit up he would recite the following verse and dramatically punctuate the final phrase by blowing a smoke ring:

I don't recommend mean imputation. It is bad for the health of your data. But I can't dissuade from using mean imputation, remember the following verse: