I still remember being amazed when I first saw the iterative square root algorithm. It was the first time that I thought math is magical. The algorithm required that I make an initial guess for the square root. I then applied a "magic formula" a few times. The magic formula improved my guess and estimated the square root that I sought.

The iterative method is called the Babylonian method for finding square roots, or sometimes Hero's method. It was known to the ancient Babylonians (1500 BC) and Greeks (100 AD) long before Newton invented his general procedure.

Here's how it works. Suppose you are given any positive number S. To find the square root of S, do the following:

Let's use this algorithm to compute the square root of S = 20 to at least two decimal places.

Because x3 and x4 agree to two decimal places, the algorithm ends after four iterations. An estimate for sqrt(20) is 4.47214.

The Babylonians and Greeks could estimate square roots by hand. Algorithm and #SAS program. Click To Tweet

How do you choose an initial guess?

You can choose any positive value as an initial guess. However, when I was a kid I used to race my friends to see who could find the square root the fastest. I discovered that if you choose a good guess, then you have to compute only a few iterations. I invented a strategy for finding a good guess, which I call "The Rule of Twos and Sevens."

In other words, a good guess starts with a 2 or a 7 and has about half as many digits as are in the whole-number part of S. My experience is that The Rule of Twos and Sevens usually converges to a solution (within two decimal places) in four or fewer iterations.

In tribute to all students who ever struggled to perform this algorithm by hand, I implemented the Babylonian square-root algorithm in SAS. You can implement the algorithm directly as a DATA step program, but I chose to use PROC FCMP to define new DATA step functions. 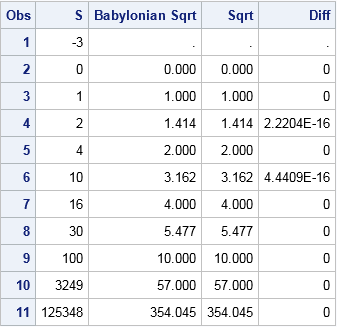 For more information about the Babylonian algorithm and other algorithms for computing square roots, see Brown (1999) Coll. Math J.

Do you remember learning a square root algorithm in school? Do you still remember it? Are there other "ancient" algorithms that you have learned that are now unnecessary because of modern technology? Leave a comment.