An interesting fact about the WHERE clause in SAS/IML is that you can specify run-time expressions for the WHERE clause, which makes it a very powerful tool for data analysis.

The WHERE clause in the USE statement

The USE statement opens a SAS data set for read access. When you need only one filter, specify a WHERE clause on the USE statement. For example, suppose you want a matrix that contains the age, weight, and height of all females in the Sashelp.Class data. The following program reads the female observations into the matrix X and prints the average age, weight, and height:

The WHERE clause in the READ statement

You can also put the WHERE clause in the READ statement. This technique is useful if you intend to read the data several times. For example, the following program reads data for females into the X matrix and data for males into the Y matrix:

If you use a WHERE clause on both the USE and READ statements, the SAS log will include the NOTE
NOTE: WHERE clause has been augmented
to inform you that the data filter combines both WHERE clauses by using a "logical AND" operator.

Expressions in the WHERE clause

Beginning with SAS/IML 13.1 (released with SAS 9.4m1), you can use expressions in WHERE clauses. This means that you can call the READ statement in loop. During each iteration, you can read and analyze various subsets of the data during each iteration.

For example, suppose you have several grouping variables and you want to conduct a BY-group analysis. You can use the UNIQUEBY technique to conduct a BY-group analysis with several variables. However, the UNIQUEBY technique requires that the data be sorted and fit in RAM. It also requires a bit of "bookkeeping" because you need to keep track of indices. If you don't mind the inefficiency of reading the data multiple times, a WHERE clause approach is conceptually easier to program.

As an example, suppose you want to analyze the MPG_City variable in the Sashelp.Cars data set for each combinations of the Origin and Type variables. To keep it simple, suppose you want to compute the mean value of MPG_City for all pairwise combinations of the Origin and Type variables, excluding the observations for American-made vehicles. This analysis is simple by using PROC MEANS. (The output for PROC MEANS is not shown.)

In PROC IML, you can read the FreqOut data to obtain the unique combinations of the Origin and Type variables. You can iterate over these combinations, reading the Sashelp.Cars data multiple times. During each iteration, you can analyze one of the BY groups, as follows: 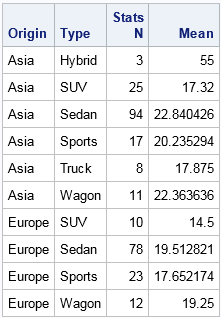 The result of the analysis is similar to the output from PROC MEANS. Notice the use of expressions in the WHERE clause in the READ statement. The expression origin=(Origin[i]) is interpreted as follows:

The example program reads the data set 10 times, once for each unique combination of Origin and Type. Although re-reading data is inefficient, there are three advantages: the data set does not need to be sorted, only one BY group at a time is ever in RAM, and the program statements are easy to write. By using this method, you do not have to keep track of sorting, indexing, or extracting the data. The WHERE clause in SAS/IML does the work for you.