No worries. The CORR procedure in Base SAS supports the WITH statement which enables you to compute and display a subset of the correlations between variables.

Correlations of certain variables WITH other variables

Often variables naturally fall into groups. For example, in the Sashelp.Cars data, the variables are related to four groups: price, power of the engine, fuel economy, and size of vehicle. In a medical study you might have certain variables related to physical characteristics that will not be affected by the study (age, height, gender) and other variables that might be affected (blood pressure, cholesterol, weight). 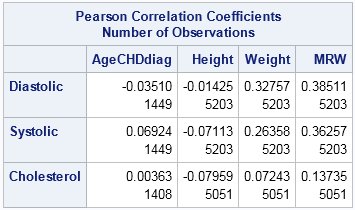 The same computation in SAS/IML

This article was motivated by a question that a SAS customer asked on a discussion forum. The question was "How can you do this computation in SAS/IML?" The customer noted that the CORR function in SAS/IML accepts only a single data matrix.

Notice that the column indices for the VAR and WITH variables are computed by using the LOC-ELEMENT technique, although for this example the columns are simply 1:4 and 5:7. The correlations are the same as were produced by PROC CORR.

However, you might be concerned that we are doing more work than is necessary. The CORR function computes the entire 7x7 matrix of correlations, which requires computing 28 pairwise correlations, when all we really need is 12. The computation is even less efficient if the VAR and WITH lists are vastly different in size, such as one variable in the first list and six in the second.

The output is identical to the previous output, and is not shown.