The rank of a matrix is one of those vexing problems in numerical linear algebra. Mathematically, the question is not difficult. However, in finite-precision arithmetic, computing the rank of a matrix (and whether it is nonsingular) can be challenging. This article suggests some best practices. The details have filled many books, journal articles, and PhD dissertations.

The mathematical rank of a matrix

In theory, you can use Gaussian elimination to compute the rank of a matrix. You reduce the matrix to row echelon form; the rank is the number of rows that contain a nonzero element.

However, these mathematical facts are not good ways to numerically determine whether a matrix is rank-deficient or singular. A naive implementation of Gaussian elimination is numerically unstable. A numerical determinant that should be mathematically zero might be computed as a very tiny nonzero number in finite-precision arithmetic. Or an ill-conditioned but non-singular matrix might have a determinant so small that it is numerically indistinguishable from a singular matrix. In any case, you should never compare a numerical value to 0.

The numerical rank of a matrix

So what's a statistical programmer to do? For the rank problem, there are several numerically robust techniques, but I will describe two that are based on the singular value decomposition (SVD). Some researchers use methods based on the QR decomposition, which is faster to compute but less reliable.

Mathematically, the rank of a matrix equals the number of nonzero singular values. Therefore a simple algorithm to estimate the rank is to use the SVD routine in SAS/IML to compute the singular values and then declare that any singular value smaller than some cutoff value is numerically the same as zero. The following example computes and displays the singular values for a 6x5 matrix by using the SVD:

You can see that the last singular value is tiny, and in fact the matrix is rank 4. Although you might be tempted to use a fixed cutoff value such as 1e-8 to determine which singular values are "small," it is usually better to incorporate factors that reflect the scale of the problem. A common cutoff value (used by MATLAB) is δ = d σmax ε where d is the maximum dimension of A, σmax is the maximum singular value of A, and ε is "machine epsilon." The machine epsilon can be computed by using the CONSTANT function in SAS. The following example computes the cutoff value and estimates the rank of the matrix:

There are other techniques that you can use to estimate the rank of a matrix. The SAS/IML documentation recommends using the generalized-inverse technique. The mathematical properties of the generalized inverse (also known as the Moore-Penrose inverse) are explained in a short 1978 article by M. James in The Mathematical Gazette.

The generalized-inverse technique does not enable you to specify a tolerance/scaling parameter, but a parameter is used internally by the GINV function to compute the generalized inverse.

It is useful to package up these techniques into a module, as follows:

A numerical test for singularity

The following table shows the result of computing the rank for five Hilbert matrices. 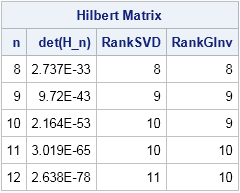 In summary, both methods perform well. The SVD method is slightly faster and performed better on this test, so I recommend that you use the SVD method to estimate the rank of rectangular matrices and to determine whether a square matrix is nonsingular. The SVD method is the default method for the RankMatrix function.