The tail of a probability distribution is an important notion in probability and statistics, but did you know that there is not a rigorous definition for the "tail"? The term is primarily used intuitively to mean the part of a distribution that is far from the distribution's peak or center. There are several reasons why a formal definition of "tail" is challenging:

From a modeling perspective, fat-tailed distributions are important when extreme events must be part of the model. For example, models of claims in the home insurance industry have to account for an intense category 5 hurricane hitting the Miami area, or Superstorm Sandy flooding the New York area. Although the probability of these extreme events is small, the size of the payout is so large that these events are vital to models of insurance claims. 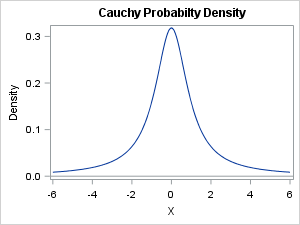 From a mathematical perspective, the most fascinating aspect of fat-tailed distributions is that the mean, variance, and other measures that describe the shape of the distribution might not be defined. You might wonder how this can be. For the symmetric Cauchy distribution, pictured at the left, it looks like the mean should be at zero. After all, the function is symmetric. However, although the Cauchy distribution has a well-defined median and mode at 0, the mean is not defined.

Mathematically, the problem is that a certain integral does not exist. However, a more convincing demonstration is to run a simulation that draws random values from the Cauchy distribution and computes the mean as the sample size increases. If the mean exists, then the running mean should converge to some value. But it doesn't. Instead, every so often an arbitrarily large value is generated, which causes the mean to jump by a large amount. This is shown by the following simulation and visualization in SAS software: 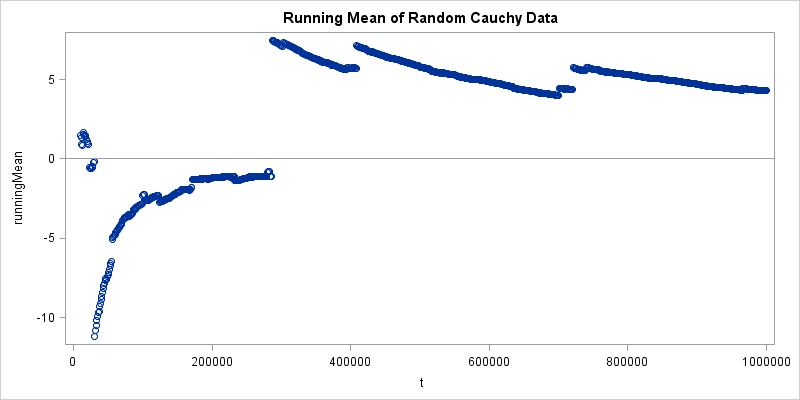 People submit billions of unique search terms to search engines. Imagine sorting all internet searches from a certain time period according to the number of times that the search term was submitted. The top-ranked terms will probably be for celebrities along with terms related to world events such as wars, natural disasters, and politics. The top-1000 search terms might account for a substantial portion of the total searches. But there are many millions of search terms that appear only a few times, or perhaps only one time. Suppose the top-1000 searches account for 10% of the total. How many search terms do you think account for 50% of the search traffic? 5,000? 10,000? The correct answer is much, much bigger! Author Chris Anderson, a former editor-in-chief at Wired magazine, says "if search were represented by a tiny lizard with a one-inch head, the tail of that lizard would stretch for 221 miles" (The Long Tail: Why the Future of Business Is Selling Less of More).

Attempts have been made to classify and rank distributions according to the rate of decay in their tails. For an introduction to this work, see Parzen (1979, JASA), but be sure to also read the rejoinder by John Tukey.

Have you encountered data that exhibits a heavy tail? What was the application? How did you model the data?