At the root of frequency analysis is the fact that certain letters in English prose appear more frequently than other letters. In a simple substitution cipher, each letters is disguised by replacing it with some other symbol. However, a leopard cannot change its spots, and the frequencies of the symbols in an enciphered text can reveal which symbols correspond to certain letters. In a sufficiently long message, the symbols for common letters such as E, T, and A will appear often in the ciphertext, whereas the symbols for uncommon letters such as J, Q, and Z will occur rarely in the ciphertext.

The frequency of letters in English text

The first task for a budding cryptanalyst is to determine the frequency distribution of letters in the language that he is deciphering. This is done by counting the number of times that each letter appears in a corpus: a large set of text (articles, books, web documents,...) that is representative of the written language. In today's world of digitized texts and rapid computing, it is easier than ever to compute the distribution of letters in a large corpus. This was done recently by Peter Norvig who used Google's digitized library as a corpus. I highly recommend Norvig's fascinating presentation of the frequency distribution of letters, words, and N-grams.

Since Norvig did the hard work, it is simple to enter the relative frequencies of each letter into SAS and visualize the results, as follows: 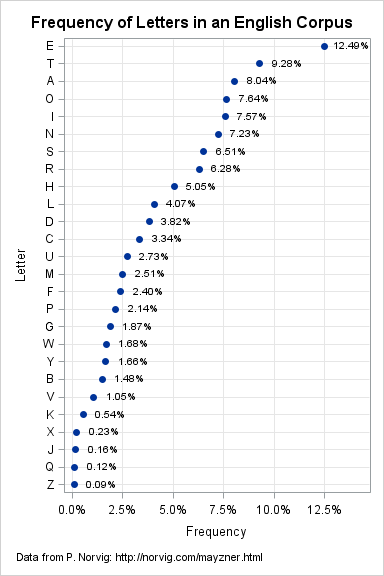 The graph shows that the letter E is the most common letter in the English language (12.5%), followed by T and A (9.3% and 8.0%, respectively). After the Big Three, the letters O, I, and N appear with similar frequencies. The letters S and R round out the list of the most frequent letters.

At the other end of the list, we see that X, J, Q, and Z are the least common letters in the corpus.

The distribution of letters in a short text

Suppose that I try to send a secret message by using a simple substitution cipher. In case the message is intercepted, I strip out all blanks and punctuation to make the ciphertext even harder to decipher. Here is the ciphertext presented as an array of long character string in SAS/IML:

The message looks formidable, but it isn't secure. Statistics—in the form of frequency analysis—can be used to suggest possible values for the letters in the text that occur most often. The following SAS/IML function counts the number of appearances of each letter in the string. It uses the SUBSTR function to convert the string into a SAS/IML vector, and then uses the LOC function to count the number of elements in the vector that matches each letter. The function returns a 26-element array whose first element is the proportion of the string that matches 'A', whose second element is the proportion that matches 'B', and so on:

You can print out the raw numbers, but it is easier to visualize the proportions if you sort the data and make a graph. The following SAS/IML statements create the same kind of graph that appeared earlier, but this time the frequencies are for this particular short encrypted text: 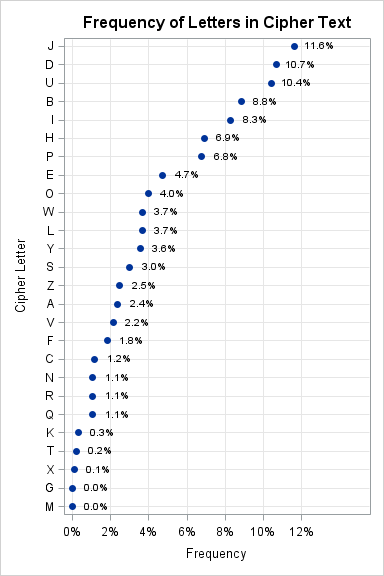 First, notice that SAS/IML 12.3 enables you to create this ODS graph entirely within SAS/IML. Notice that the distribution of (enciphered) letters in the short message looks similar to the previous graph (the distribution of letters in a corpus). You can think of the ciphertext as a sample of English text. As such, the frequency of letters in the cipher text is expected to be close to (but not identical to) the frequency of letters in the corpus. The frequencies in the small sample suggest that the most common letter, plaintext 'e', is probably being disguised as the ciphertext 'J', 'D', or 'U'. Similarly, the plaintext 't' and 'a' are probably disguised as 'J', 'D', or 'U', although they could also be 'B' or 'I'.

The reason frequency analysis is successful is not because it identifies certain letters with certainty—it doesn't! However, it indicates the probable identities of certain letters, and this greatly simplifies the number of possibilities that the cryptanalysts needs to check.

Using frequency analysis as a method of cryptanalysis

For the purpose of solving a recreational puzzle such as the Cryptoquote, this kind of single-letter frequency analysis is often sufficienct to begin breaking the code. The puzzle solver uses the frequency analysis to guess one or two of the substitutions (perhaps 'J'='e' and 'D'='t'). If the message still looks like gibberish after the guess, the guess was probably wrong, and the puzzler can make a different guess (perhaps 'J'='t' and 'U'='e'). Usually only a few steps of this guessing game are necessary until a substitution results in a partially deciphered text that looks like it might contain recognizable words. Then, like pulling a string on a sweater, the puzzle unravels as the puzzler uses existing knowledge to guide subsequent substitutions.