The SAS/IML language is used for many kinds of computations, but three important numerical tasks are integration, optimization, and root finding. Recently a SAS customer asked for help with a problem that involved all three tasks. The customer had an objective function that was defined in terms of an integral. The problem was to find the roots and the maximum value of the function.

An objective function that involves an integral

When constructing an example, it is always helpful to use a problem for which the exact answer is known. For this article, I will define the objective function as follows:

To make the example more realistic, I've included a parameter, a. For each value of x, this function requires evaluating a definite integral. (Integrals with an upper limit of x arise when integrating probability density functions.) The integrand is the function a – x y2. The dummy variable is y, so a and x are both treated as constant parameters when evaluating the integrand. Here are some useful facts about this function:

The remainder of this article demonstrates how to find the roots and maximum value of this function, which is defined in terms of an integral.

Defining the function in the SAS/IML language

You can now define a SAS/IML module that evaluates the function F. I like to use param as the name of the argument to an objective function. The name helps me to remember that param is going to be manipulated by root-finding or nonlinear programming (NLP) algorithms in order to find the roots and extrema of the function. Here's how I would define the objective function that evaluates F:

I used a few tricks and techniques to define this module:

When tasked with finding the roots or extrema of a function, I recommend that you visualize the function. This is useful for estimating the number of roots, the location of roots, and finding an initial guess for the optimum. Although visualization can be difficult when the objective function depends on a large number of variables, in this case the visualization requires merely graphing the function. 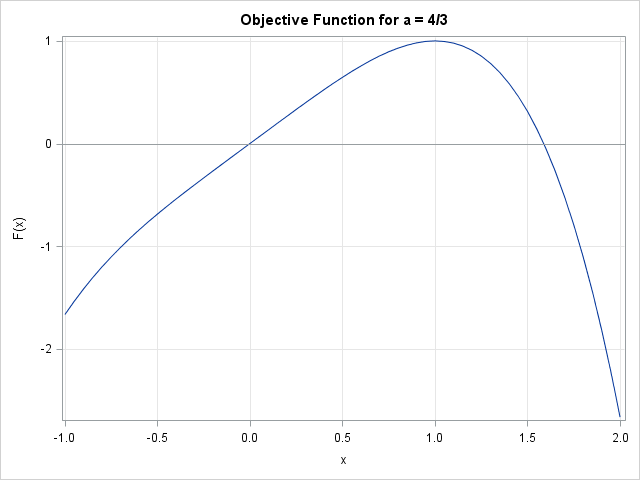 The graph indicates that the function has two roots, one near x=0 and the other near x=1.6. The function appears to have one maximum, which is located near x=1. Of course, these values depend on the value of the parameter a.

Find roots of the function

The objective function is ready to work with. The following statements use the FROOT function to find roots on the interval [–1, 1] and [1, 2]:

Find a maximum of the function

To find the maximum, you can use one of the nonlinear programming functions in SAS/IML. In previous optimization problems I have used the NLPNRA subroutine, which uses the Newton-Raphson method to compute a maximum. However, Newton-Raphson is probably not the best choice for this problem because the function evaluation requires computing an integral, and therefore contains a small amount of numerical error. Furthermore, unless I "cheat" and use the exact solution to compute exact derivatives, the Newton-Raphson algorithm would have to use finite difference approximations to compute the derivative and second derivative at each point. For this problem these finite-difference computations are likely to be expensive and not very accurate.

Instead, I will use the Nelder-Mead simplex method, which in implemented in the NLPNMS subroutine. The simplex method solves an optimization problem without using any derivatives. This method can be a good choice for optimizing functions that have low precision, such as the result of evaluating an integral or the result of a simulation.

As discussed previously, the maximum occurs at x=1.

This article has shown how to define a SAS/IML module that computes an integral in order to evaluate the function. The tips and techniques in this article should enable you to find the roots and extrema of complicated functions that arise in computational statistics.