This article assumes that the parameters for the differential equations are known. If you need to estimate the parameters from data, see the paper by Erdman and Morelock (1996) and the examples in the documentation for the MODEL procedure in SAS/ETS software.

A simple mechanical system is a spring with a mass at the end. If the spring obeys Hooke's Law and friction is ignored, Newton's Second Law dictates that the acceleration on the mass is proportional to the displacement of the mass from equilibrium. This leads to the second order differential equation x''(t) = -c x(t), which is the familiar differential equation for simple harmonic motion. (The prime indicates a derivative with respect to time.)

Notice that because this differential equation is linear, you could also use matrix multiplication to define the module by using a single statement:

For this example, I want to obtain and graph the solution at evenly spaced points in time. I can use a trick to accomplish this. If I specify a single time interval [0, T], I will obtain the final solution (x(T), v(T)). However, I can obtain the solution at multiple time points by specifying an increasing sequence such as t = do(0.2, 10, 0.2). This forces the ODS routine to return the solution at each of the specified time points.

The following statements define the parameters and call the ODE subroutine to compute the solution at a sequence of time points up to T = 10:

The solution is returned in the soln matrix, which has two rows. Each column of the soln matrix contains the (x(t), v(t)) values for a specified value of t > 0.

The following statements write the ODE solution to a SAS data set and call the SGPLOT procedure to graph the solution as a function of time: 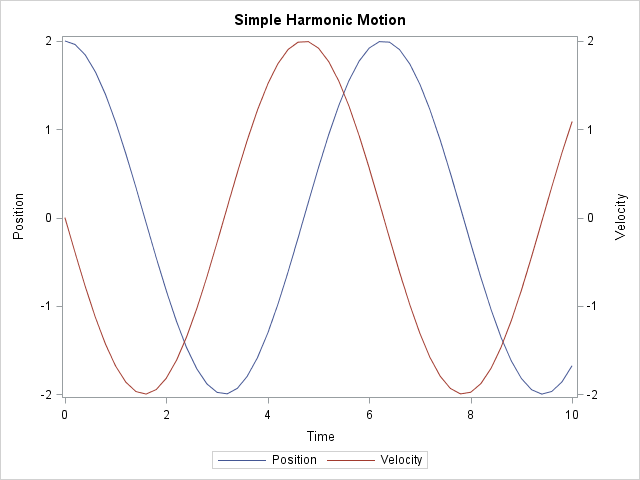 There is a second way to graph the solution. The following statements display the solution as a parametric curve in the (x, v) plane. 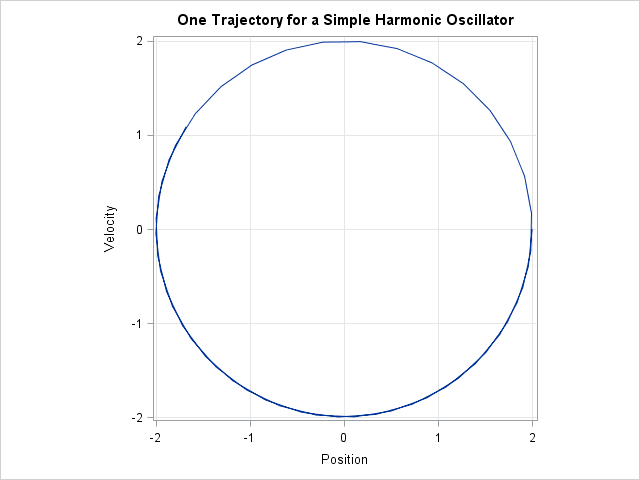 The parametric curve is a single trajectory of a "phase portrait," which can be used to analyze the qualitative dynamics of a system of differential equations. In my next blog post, I will show how to create a phase portrait in SAS.